A Thief in the Night: A Book of Raffles' Adventures (Dodo Press) Sented by Jacob 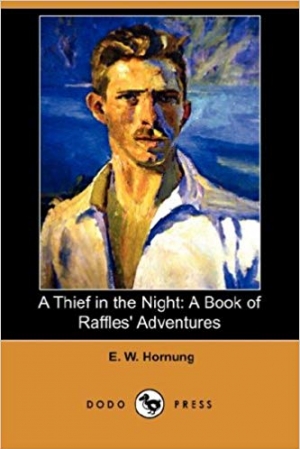 Ernest William Hornung (1866-1921) was an English author. He spent most of his life in England and France, but in 1884 left for Australia and stayed for two years
Download book (epub - 509.81 KB)
This link for educational purpose only. Please remove file from your computer after familiarization.

Ernest William Hornung (1866-1921) was an English author. He spent most of his life in England and France, but in 1884 left for Australia and stayed for two years. Although his Australian experience had been so short, it coloured most of his literary work from A Bride from the Bush (1890), to Old Offenders and a Few Old Scores (1923) which appeared after his death. He published the poems Bond and Free and Wooden Crosses in The Times. The character of A. J. Raffles, a "gentleman thief", first appeared in Cassell's Magazine in 1898 and the stories were later collected as The Amateur Cracksman (1899). After Hornung spent time in the trenches with the troops in France, he published Notes of a Camp-Follower on the Western Front in 1919, a detailed account of his time there. His other works include: Dead Men Tell No Tales (1899), The Black Mask (1901), No Hero (1903), A Thief in the Night: A Book of Raffles' Adventures (1905) and Mr. Justice Raffles (1909).

The Riot at Cougar Paw

A Flight to Heaven