An Excess Male Sented by Paul 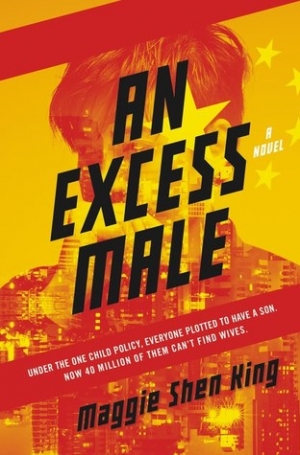 From debut author Maggie Shen King, An Excess Male is the chilling dystopian tale of politics, inequality, marriage, love, and rebellion, set in a near-future China, that further explores the themes of the classics The Handmaid's Tale and When She Woke.
Download book (epub - 1.39 MB)
This link for educational purpose only. Please remove file from your computer after familiarization.

From debut author Maggie Shen King, An Excess Male is the chilling dystopian tale of politics, inequality, marriage, love, and rebellion, set in a near-future China, that further explores the themes of the classics The Handmaid's Tale and When She Woke.

Under the One Child Policy, everyone plotted to have a son.

China's One Child Policy and its cultural preference for male heirs have created a society overrun by 40 million unmarriageable men. By the year 2030, more than twenty-five percent of men in their late thirties will not have a family of their own. An Excess Male is one such leftover man's quest for love and family under a State that seeks to glorify its past mistakes and impose order through authoritarian measures, reinvigorated Communist ideals, and social engineering.

Wei-guo holds fast to the belief that as long as he continues to improve himself, his small business, and in turn, his country, his chance at love will come. He finally saves up the dowry required to enter matchmaking talks at the lowest rung as a third husband-the maximum allowed by law. Only a single family-one harboring an illegal spouse-shows interest, yet with May-ling and her two husbands, Wei-guo feels seen, heard, and connected to like never before. But everyone and everything-walls, streetlights, garbage cans-are listening, and men, excess or not, are dispensable to the State. Wei-guo must reach a new understanding of patriotism and test the limits of his love and his resolve in order to save himself and this family he has come to hold dear.

In Maggie Shen King's startling and beautiful debut, An Excess Male looks to explore the intersection of marriage, family, gender, and state in an all-too-plausible future.

The Sky Between You and Me

England Was an Island Once

You, Me and Other People

A Great and Terrible Beauty

Anne of Ingleside (Anne of Green Gables, No. 6)