Cathedrals of Glass: A Planet of Blood and Ice Sented by Michael 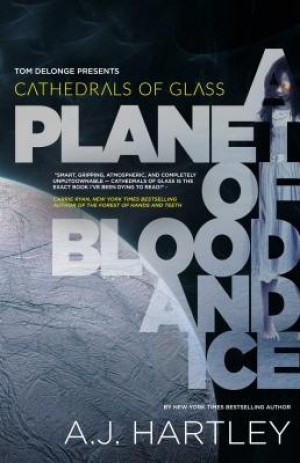 Cathedrals of Glass: A Planet of Blood and Ice

"Deviance is unattractive and jeopardizes all we hold dear..."

Ten teenagers broke behavioral law. Sentenced to be reeducated on the moon of Jerem, they were placed in stasis on the automated ship Phetteron for their six day journey. They never reached their destination.

Thrown off course by a computer malfunction, the Phetteron is damaged in an asteroid belt and crash lands on the uninhabited ice planet of Valkrys. Having spent their lives in temperature controlled environments, consuming nutrient supplements, and interacting with people mostly through the infonet, the teens are unprepared to depend on each other to face the harsh, hostile, and hellish landscape. Home will send a rescue party long before their meager supplies run out.

"No contrary positions are viable..."

Sola was a roamer. She wandered the city after curfew, reveling in the freedom of being disconnected from the techgrid and embracing the joy of physical activity. For those actions, Home declared her deviant. But on Valkrys, her deviance is an asset that may be the teens' only hope for survival.

As Sola explores their strange new world, she discovers that she and her shipmates are linked by something more frightening than their subversive behaviors-and uncovers a truth about the planet the authorities at Home wanted buried.

Valkrys is not uninhabited. And what lives there is predatory...

Sisters of the Cross (Russian Library)

No Other Will Do (Ladies of Harper's Station, Book 1)