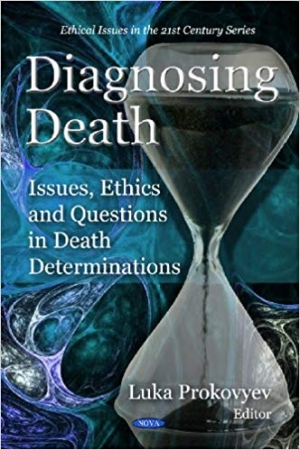 The question of how and by what standard an individual should be declared dead is once more a matter of controversy.
Download book (pdf - 1.59 MB)
This link for educational purpose only. Please remove file from your computer after familiarization.

The question of how and by what standard an individual should be declared dead is once more a matter of controversy. With this book, the President's Council on Bioethics takes up this controversy and seeks to illuminate the issues at the centre of the renewed debate about the inherently perplexing problems of determining human death in an age of life-sustaining technologies. In most human deaths, the loss of neurological function is accompanied by the traditional, familiar markers of death - the patient stops breathing, his or her heart stops beating, and the body starts to decay. In relatively rare cases, however, the irreversible loss of brain-dependent functions occurs while the body, with technological assistance, continues to circulate blood and to show other signs of life. In such cases, there is controversy and confusion about whether death has actually occurred. In this book, the President's Council examines the main lines of criticism and defence of the neurological standard, and also explores the ethical concerns engendered by the use of the traditional cardiopulmonary standard in the organ procurement practice known as 'controlled donation after cardiac death'. In doing so, the President's Council on Bioethics aims to appraise the American public of the contemporary state of the debate and to guide the publics reflections on matters that touch on some of society's deepest human questions. This book consists of public domain documents which have been located, gathered, combined, reformatted, and enhanced with a subject index, selectively edited and bound to provide easy access.