Do Not Say We Have Nothing Sented by Musa 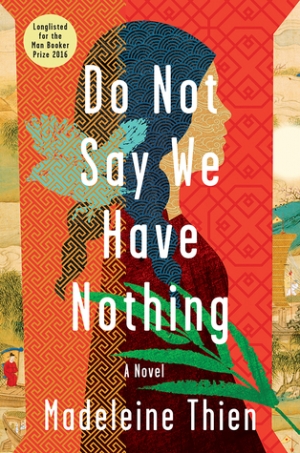 Do Not Say We Have Nothing

Winner of the 2016 Scotiabank Giller Prize and the Governor General's Literary Award for Fiction, shortlisted for the Man Booker Prize, and longlisted for the 2017 Andrew Carnegie Medal for Excellence in Fiction, this extraordinary novel tells the story of three musicians in China before, during and after the Tiananmen Square protests of 1989.
Download book (epub - 2.09 MB)
This link for educational purpose only. Please remove file from your computer after familiarization.

Winner of the 2016 Scotiabank Giller Prize and the Governor General's Literary Award for Fiction, shortlisted for the Man Booker Prize, and longlisted for the 2017 Andrew Carnegie Medal for Excellence in Fiction, this extraordinary novel tells the story of three musicians in China before, during and after the Tiananmen Square protests of 1989.

Madeleine Thien's new novel is breathtaking in scope and ambition even as it is hauntingly intimate. With the ease and skill of a master storyteller, Thien takes us inside an extended family in China, showing us the lives of two successive generations Cthose who lived through Mao's Cultural Revolution in the mid-twentieth century; and the children of the survivors, who became the students protesting in Tiananmen Square in 1989, in one of the most important political moments of the past century. With exquisite writing sharpened by a surprising vein of wit and sly humour, Thien has crafted unforgettable characters who are by turns flinty and headstrong, dreamy and tender, foolish and wise.

At the centre of this epic tale, as capacious and mysterious as life itself, are enigmatic Sparrow, a genius composer who wishes desperately to create music yet can find truth only in silence; his mother and aunt, Big Mother Knife and Swirl, survivors with captivating singing voices and an unbreakable bond; Sparrow's ethereal cousin Zhuli, daughter of Swirl and storyteller Wen the Dreamer, who as a child witnesses the denunciation of her parents and as a young woman becomes the target of denunciations herself; and headstrong, talented Kai, best friend of Sparrow and Zhuli, and a determinedly successful musician who is a virtuoso at masking his true self until the day he can hide no longer. Here, too, is Kai's daughter, the ever-questioning mathematician Marie, who pieces together the tale of her fractured family in present-day Vancouver, seeking a fragile meaning in the layers of their collective story.

With maturity and sophistication, humour and beauty, a huge heart and impressive understanding, Thien has crafted a novel that is at once beautifully intimate and grandly political, rooted in the details of daily life inside China, yet transcendent in its universality.

Do Not Become Alarmed

No Other Will Do (Ladies of Harper's Station, Book 1)

This Book Is Not for You

Next Door, Next World