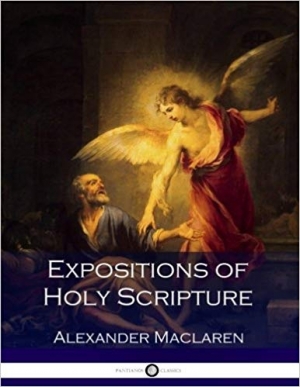 In Expositions of Holy Scripture, Christian minister Alexander Maclaren provides a detailed examination and commentary of four of the most important holy scriptures: the epistle of Ephesians, the first and second books of Saint Peter, and the book of Saint John.
Download book (pdf - 1.71 MB)
This link for educational purpose only. Please remove file from your computer after familiarization.

In Expositions of Holy Scripture, Christian minister Alexander Maclaren provides a detailed examination and commentary of four of the most important holy scriptures: the epistle of Ephesians, the first and second books of Saint Peter, and the book of Saint John.

Superbly researched and full of detail, this book demonstrates the depth of knowledge which Alexander Maclaren approached the holy scriptures. An avid student of Greek and Hebrew, Maclaren held a notably thorough approach to the scripture, which he sought to explain and interpret for the Christian audience.

Each successive chapter and verse of the holy writings are analysed by Maclaren, who sets aside his own chapters devoted to explaining the principle tenets of the text. Every key event or holy doctrine in the writings receives an account, such as for instance the famous Resurrection of the Souls and the various explanations of Christ as teacher and holy Lord.

This logical approach captures the heart and essence of the scriptures, allowing the reader to not merely learn the passages, but to comprehend their essential meaning and emotional gravitas. The reader thus emerges from his study with both memory and comprehension of the texts, moved by the passion with which the passages of this book were painstakingly assembled through years of study.

The voracious and thorough approach Maclaren took to the ancient scriptures of the saints was mirrored in his life as a preacher. His years of training in the seminary saw him develop a reputation as a man passionate and convinced of the importance of the scripture, which he preached with energy and vigor.

Celebrated during his lifetime and praised highly by various bishops in Scotland, England and beyond, Alexander Maclaren received multiple honorary degrees for his work. The citizens of Manchester, impressed by his works, elected to have his portrait painted, before his eventual retirement in 1903 following a long career spent in service of the church.

Boundaries: When to Say Yes, How to Say No to Take Control of Your Life

Present Over Perfect: Leaving Behind Frantic for a Simpler, More Soulful Way of Living

Zhije: The Pacification of Suffering: Essential Teachings of the Eight Practice Lineages of Tibet, Volume 13

The Circle of Peace.

The Cities of Refuge: or, The Name of Jesus: A Sunday book for the young

Illustrations Of The Book Of Job

Irish Presbyterians and the Shaping of Western Pennsylvania, 1770-1830

The New Testament of Our Lord and Savior Jesus Christ: The Common English Version, Corrected by the Final Committee of the American Bible Union (Classic Reprint)

Docker in Practice Sented by Jacob

Linux in Action Sented by Shon