If Money Talks, What Does it Say?: Corruption and Business Financing of Political Parties Sented by Jacob 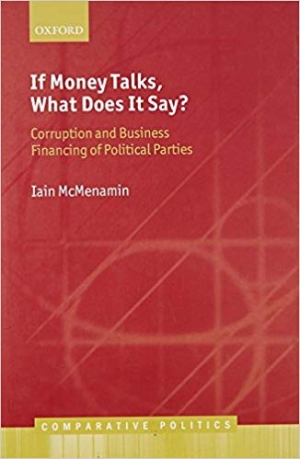 If Money Talks, What Does it Say?: Corruption and Business Financing of Political Parties

Download book (pdf - 1.20 MB)
This link for educational purpose only. Please remove file from your computer after familiarization.

Why do businesses contribute to political parties? Is money a universal language? Do business contributions to political parties convey different messages in different countries? This book answers these questions based on intensive case studies of Australia, Canada, and Germany, as well as data from other countries. Business money does talk politics. In liberal Australia and Canada, the competitive short-term focus of firms generated substantial demand for private goods that could help firms develop an advantage over their rivals. Thus, business financing of parties conveyed a pragmatic message: in exchange for small but certain financial benefits, contributing businesses expect, as a reciprocation, to receive special consideration of their lobbying efforts. Australia's left-right party system created an awareness of policy risk, which motivated ideological payments, but there was no ideological bias in business financing of politics in centrist Canada. In Germany's co-ordinated economy, the most important policies for firms tend to be the public goods defined, championed, and delivered by their business associations. In this context, the pragmatic motivation for contributions to political parties is weak. The combination of consensual political institutions and constrained parties means there is a very low risk of major policy change from election to election. So, there is also little interest in ideological financing of political parties. If money talks, what does it say? places business financing of political parties in the context of debates about political corruption and offers advice on political reform.

Comparative Politics is a series for students, teachers, and researchers of political science that deals with contemporary government and politics. Global in scope, books in the series are characterised by a stress on comparative analysis and strong methodological rigour. The series is published in association with the European Consortium for Political Research.

The Everything Investing in Your 20s and 30s Book: Learn How to Manage Your Money and Start Investing for Your Future--Now!

Money Lessons: How to manage your finances to get the life you want

The Money Changers: Currency Reform from Aristotle to E-Cash

The 5 Money Personalities: Speaking the Same Love and Money Language

Show Me the Money: How to Determine ROI in People, Projects, and Programs

The 10 Commandments of Money: Survive and Thrive in the New Economy

Biobanking in the 21st Century Sented by Musa