In the Peanut Gallery with 'Mystery Science Theater 3000': Essays on Film, Fandom, Technology and the Culture of Riffing Sented by Shon 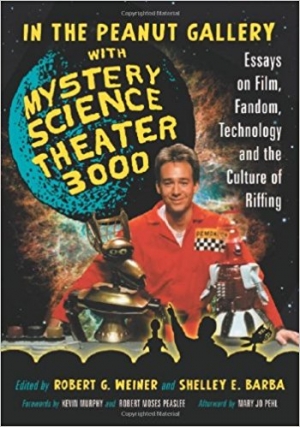 In the Peanut Gallery with 'Mystery Science Theater 3000': Essays on Film, Fandom, Technology and the Culture of Riffing

This is a collection of essays by a variety of authors who all share an obvious love and serious obsession with Mystery Science Theater 3000. These essays delve into some expected subjects like the culture of riffing and bad movies, but also include an extensive analysis of Gypsy and gender roles, as well as an examination of Cambots impact on the show. In all, there are twenty five different essays included in this collection, each by a different author.
Download book (pdf - 2.01 MB)
This link for educational purpose only. Please remove file from your computer after familiarization.

The award-winning television series Mystery Science Theater 3000 (1988-1999) has been described as "the smartest, funniest show in America," and forever changed the way we watch movies. The series featured a human host and a pair of robotic puppets who, while being subjected to some of the worst films ever made, provided ongoing hilarious and insightful commentary in a style popularly known as "riffing." These essays represent the first full-length scholarly analysis of Mystery Science Theater 3000--MST3K--which blossomed from humble beginnings as a Minnesota public-access television show into a cultural phenomenon on two major cable networks. The book includes interviews with series creator Joel Hodgson and cast members Kevin Murphy and Trace Beaulieu.

Posttraumatic Growth and Culturally Competent Practice: Lessons Learned from Around the Globe

The Fear Project: What Our Most Primal Emotion Taught Me About Survival, Success, Surfing . . . and Love

The Power of Words: Unveiling the Speaker and Writer's Hidden Craft

Conscious evolution: awakening the power of our social potential

The Facts on File Companion to British Poetry Before 1600

The Clinical Interview of the Child: Theory and Practice by Nancy Thorndike Greenspan

Realising Genjokoan: The Key to Dogen's Shobogenzo by Shohaku Okumura (2010-08-13)

Seeing What Others Don't: The Remarkable Ways We Gain Insights

Multi-Sited Ethnography: Problems and Possibilities in the Translocation of Research Methods