Peace and War (The Forever War #1-3) Sented by Musa 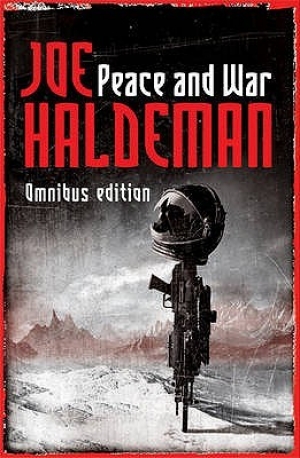 Together in one volume for the first time ever; his classic novel of epic future conflict, The Forever War, its sequel Forever Free, and the companion novel, Forever Peace.
Download book (epub - 894.56 KB)
This link for educational purpose only. Please remove file from your computer after familiarization.

Together in one volume for the first time ever; his classic novel of epic future conflict, The Forever War, its sequel Forever Free, and the companion novel, Forever Peace.

WAR
William Mandella is a reluctant hero, drafted to fight in a distant interstellar war against unknowable and unconquerable aliens. But his greatest test will come when he returns to Earth. Relativity means that everey time he returns home after a few months' tour of duty, centuries have passed on Earth, making him and his fellows ever more isolated from the world for whose future they are fighting.

FREE
When Mandella returns for the last time he finds humanity has evolved into a group mind called Man. Living a dull life in an autocratic and intrusive society, missing the certainties of combat and feeling increasingly alienated, the veterans plan an escape. But when their ship starts to fail, their journey becomes a search for the unknown.

PEACE
2043. The Ngumi War rages, fought by 'soldierboys', indestructible machines operated remotely by soldiers hundreds of miles away. Julian Class is one of those soldiers, and for him war is truly hell. But he and his companion, Dr Amelia Harding, have discovered something that could literally take the universe back to square one. For Julian, the discovery isn't so much terrifying as tempting...

Harry Potter and the Dragon's Treasure

Charlie and the Chocolate Factory

The Moon and the Other

Harry Potter and the Sorcerer's Stone

A Court of Thorns and Roses