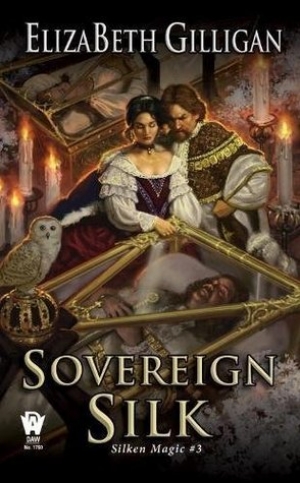 Sovereign Silk is the third book of a series set in the mythical kingdom of Tyrrhia, where courtly politics, magic, and the silk trade intersect.
Download book (epub - 1.63 MB)
This link for educational purpose only. Please remove file from your computer after familiarization.

Sovereign Silk is the third book of a series set in the mythical kingdom of Tyrrhia, where courtly politics, magic, and the silk trade intersect.

The very future of Tyrrhia is endangered when assassins target Alban, the beloved king, while his wife, Queen Idala, lies on the brink of death after giving birth to quadruplets whose conception was marked by dark magic. With the king and queen's firstborn son far too young to assume the throne should the worst befall, all five children will end up in the care of the queen's brother, Duke Stefano, and his Romani Duchessa, Luciana, who are expecting their own fairy-blessed child.

At this uncertain time, magical and diabolical plots converge, threatening the young heirs, their guardians, and the peace and stability of the kingdom. Stefano and Luciana must walk the tightrope of political intrigues that threaten all they hold dear, and through their wits and derring-do--aided by the power and skills of the Rom--preserve their children, their peoples and their kingdom.