The White Company Sented by Emma 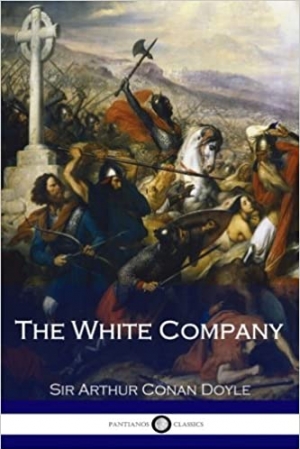 Conan Doyle's classic historical adventure set amidst the conflict between the monarchs of England, France and Spain brings the Middle Ages vividly to life.
Download book (epub - 950.04 KB)
This link for educational purpose only. Please remove file from your computer after familiarization.

We join Alleyne, a young and valiant man, born in an era where devotion to God, hardship and war are facts of life. Raised in a Catholic abbey, Alleyne is a clever and resourceful but naive about the adversities the wider world holds. Eventually after discovering most of his family's estate was given to the church in exchange for his care, Alleyne and his friends join The White Company - a group of hardened mercenaries who thirst for battle and adventure.

Journeying southward, first to France and then into Castile, the band enjoy many adventures, fending off adversaries and surmounting foes as they go. Much is at stake however: can Alleyne succeed in his dreams of returning himself and his family to prosperity, and perhaps even marry fair maiden in the process?

A lively and compelling tale which benefits strongly from Conan Doyle's studied research of the period, The White Company remains a classic of historical fiction. For the most part the book was overshadowed by the far more popular Sherlock Holmes series, which caused Doyle - who much-preferred writing historical fiction and other works, as opposed to detective fiction - a certain frustration.

Homes and how to make them

The Ghost Who Fell In Love

A Hole in the Language

The Perks of Being a Wallflower