They All Fall Down Sented by Musa 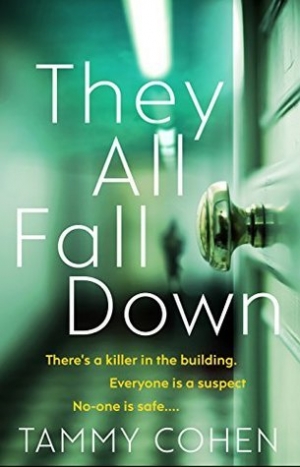 They All Fall Down

Hannah had a perfect life in London-a loving husband, a great job-until she did something shocking. Something that she doesn't quite understand herself; and now she has landed herself in a high-risk psychiatric unit.
Download book (epub - 1.29 MB)
This link for educational purpose only. Please remove file from your computer after familiarization.

Hannah had a perfect life in London-a loving husband, a great job-until she did something shocking. Something that she doesn't quite understand herself; and now she has landed herself in a high-risk psychiatric unit.

Since Hannah has been admitted, two women have died, including Charlie, one of her closest friends in the institution. It's a high-risk unit, the authorities say. Deaths happen. But Hannah knows Charlie wouldn't have killed herself. She is convinced there's a serial killer picking off the patients one by one, passing their deaths off as suicides. But why? And who will believe her?

Corinne, Hannah's mother, is worried sick about her eldest daughter. She hates that she's ended up in the unit, though she knows it's the best place for her to get the treatment she needs. At first, Corinne assumes Hannah's outlandish claims about a killer in the unit are just another manifestation of her psychological condition, but as she starts to uncover strange inconsistencies surrounding the unit's charismatic director, Dr. Roberts, she begins to wonder if her daughter might have stumbled upon the truth.

But who can Corinne trust, when she doesn't even trust her own daughter?

All the Bright Places

All the Truth That's in Me

The Immortalists Sented by Michael