A Critical History of Poverty Finance Sented by Sarah Gerdes 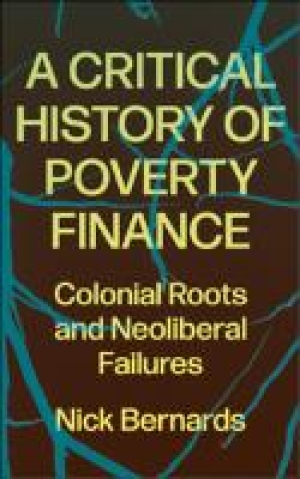 A Critical History of Poverty Finance

Starting from the recent rise of much-hyped ‘fintech’ (financial technologies) solutions for development finance, which have been heralded by the World Bank/IMF/G20 etc as a silver bullet in the fight against poverty, this monograph provides a critical historical context of development finance from a post-colonial perspective.
Download book (pdf - 1.76 MB)
This link for educational purpose only. Please remove file from your computer after familiarization.

Starting from the recent rise of much-hyped ‘fintech’ (financial technologies) solutions for development finance, which have been heralded by the World Bank/IMF/G20 etc as a silver bullet in the fight against poverty, this monograph provides a critical historical context of development finance from a post-colonial perspective. Whilst engaging with the specific weaknesses of the most recent trends of mobile technologies, microinsurance etc in ‘Digital Financial Inclusion’ efforts, author Nick Bernards explains how and why these suffer from the same shortcomings as previous iterations of neoliberal ‘financial inclusion’, namely that they all rely on and ultimately reinforce existing patters of inequality and uneven development, many of which date back to the first days of colonialism; and that they rely on artificially created markets that simply aren’t there among the world’s most disadvantaged economic actors. The critical assessment of fintech is certainly one selling point of this book, though its major original contribution lies in providing the broader backdrop of why this type of quintessentially neoliberal pipe dream of poverty alleviation cannot work and never has. Bernards puts fintech in the lineage of efforts led in particular by colonial administrations in Africa and South Asia since the 1930s, and then later by the World Bank in the 1970s, whose underlying principles can be traced back to the first guiding principles of colonial rule. The book hence offers both, an astute analysis of the current fintech fad as well as a thorough and detailed colonial history of development finance. The book would be clearly an academic monograph, and I guess could conceivably be priced even higher than suggested here. Having said that, I found Nick’s writing style to be eminently readable and actually potentially capable of drawing in some of the elusive ‘interested general public’ readership. Nick’s home discipline is international politics, but his regional specialism is sub-Saharan Africa, which I think is apparent in his writing that seems just as informed by on-the-ground experiences as by theoretical analysis. He is Canadian and still has decent ties there (PhD at McMaster in 2016). Might be worth asking Fernwood/BTL if they’d be interested in a co-pub. In sum, I think this could be a low-risk, solid title that sits well at the intersections of development and postcolonial studies as well as critiques of neoliberal economics and digital capitalism.

Robots, Androids, and Animatrons 12 Incredible Projects You Can Build

The Cook: A Novel

Style and Rhetoric of Short Narrative Fiction: Covert Progressions Behind Overt Plots (Routledge Studies in Rhetoric and Stylistics)

Women, Work and Colonialism in the Netherlands and Java Comparisons, Contrasts, and Connections, 1830-1940

A Prometheus on a Human Scale – Ignacy Łukasiewicz