A First Course in Harmonic Analysis Sented by Daniel 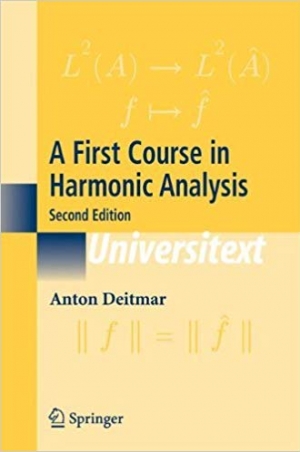 A First Course in Harmonic Analysis

Download book (pdf - 1.22 MB)
This link for educational purpose only. Please remove file from your computer after familiarization.

This book is a primer in harmonic analysis using an elementary approach. Its first aim is to provide an introduction to Fourier analysis, leading up to the Poisson Summation Formula. Secondly, it makes the reader aware of the fact that both, the Fourier series and the Fourier transform, are special cases of a more general theory arising in the context of locally compact abelian groups. The third goal of this book is to introduce the reader to the techniques used in harmonic analysis of noncommutative groups. There are two new chapters in this new edition. One on distributions will complete the set of real variable methods introduced in the first part. The other on the Heisenberg Group provides an example of a group that is neither compact nor abelian, yet is simple enough to easily deduce the Plancherel Theorem.

Modeling for Insight: A Master Class for Business Analysts

Mathematical Methods for Physics and Engineering: A Comprehensive Guide

Geometry: The Line and the Circle (AMS/MAA Textbooks)

The Nature Fix: Why Nature Makes us Happier, Healthier, and More Creative

Catch Up Maths & Stats: For the Life and Medical Sciences

Art of Computer Programming, Volume 4A, The: Combinatorial Algorithms, Part 1

Puzzles, Paradoxes, and Problem Solving: An Introduction to Mathematical Thinking

The Shores Of The Adriatic, The Austrian Side, The Küstenlande, Istria, And Dalmatia..

Definitions, Solved and Unsolved Problems, Conjectures, and Theorems in Number Theory and Geometry

IT Roadmap to a Geospatial Future