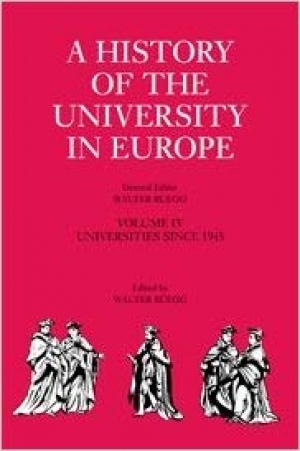 A History of the University in Europe Universities since 1945

Download book (pdf - 3.03 MB)
This link for educational purpose only. Please remove file from your computer after familiarization.

This is the final volume in a four-part series covering the development of the university in Europe (east and west) from its origins to the present day, focusing on a number of major themes viewed from a European perspective. The originality of the series lies in its comparative, interdisciplinary, collaborative and transnational nature. It deals also with the content of what was taught at the universities, but its main purpose is an appreciation of the role and structures of the universities as seen against a backdrop of changing conditions, ideas and values. This volume deals with the reconstruction and epoch-making expansion of higher education after 1945, which led to the triumph of modern science. It traces the development of the relationship between universities and national states, teachers and students, their ambitions and political activities. Special attention is paid to fundamental changes in the content of teaching at the universities.

About Korean Culture and Information Service

Supplanting the Postmodern: An Anthology of Writings on the Arts and Culture of the Early 21st Century

A return to the village

Multi-Sited Ethnography: Problems and Possibilities in the Translocation of Research Methods