A Modern Utopia Sented by Luis 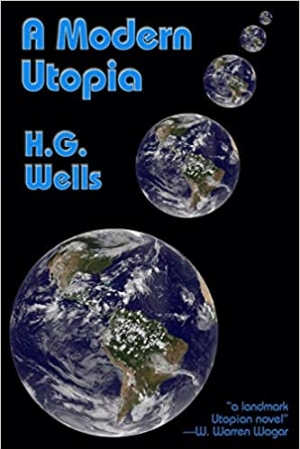 A Modern Utopia is one of H.G. Wells' explorations of social problems set in the form of a novel, but it is more a complex investigation of what might be than a mere fictional story.
Download book (epub - 501.86 KB)
This link for educational purpose only. Please remove file from your computer after familiarization.

A Modern Utopia is one of H.G. Wells' explorations of social problems set in the form of a novel, but it is more a complex investigation of what might be than a mere fictional story.

The unnamed narrator and a traveling companion find themselves on a parallel Earth, where the geology, biology, and very people are duplicates of those we know. They differ, however, in their outlook on life, methods of living and organizing themselves, and many other sociological issues. Through the eyes of the two we recognize (and their doppelgangers on this other Earth), we explore the possibilities provided in Wells' utopian society, where people work for the common betterment, rather than personal enrichment.

Complex, visionary, and thought-provoking, author Joseph Conrad complained of the book that Wells did not "take sufficient account of human imbecility which is cunning and perfidious."

A Modern Utopia is an early one of the 50 novels—and an even greater number of nonfiction works—H.G. Wells produced during a writing career that spanned decades. His first novel, The Time Machine, appeared in 1895, while his last followed in 1941, You Can't Be Too Careful. His non-fiction books debuted with a Text-Book of Biology in 1893, through a discussion of Marxism vs Liberalism in 1945.

A Honeymoon in Space

Tom Swift and His War Tank

Quest of the Golden Ape

Tom Swift and His Electric Locomotive

Death of a Spaceman

Cry from a Far Plane

A Journey in Other Worlds

Data Structures and Algorithms with Python Sented by Shon

Programming with Python Sented by Daniel