A Nuclear Refrain Sented by Rebecca 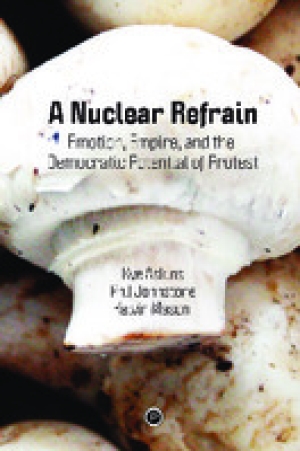 "A Nuclear Refrain is a spatial fiction that critiques the policy of nuclear deterrence, the concept of Mutually Assured Destruction, and the UK’s decision to replace its Vanguard submarines, so-called Trident replacement.
Download book (pdf - 11.31 MB)
This link for educational purpose only. Please remove file from your computer after familiarization.

"A Nuclear Refrain is a spatial fiction that critiques the policy of nuclear deterrence, the concept of Mutually Assured Destruction, and the UK’s decision to replace its Vanguard submarines, so-called Trident replacement. We challenge that decision via extending our geographical imaginations into the past, present, and future. Noting the more usual economic, moral, and strategic objections to Trident and its replacement, A Nuclear Refrain considers the issues from less familiar perspectives: the emotional and embodied, empire and the establishment, and the impact on democratic potentialities. Set against the authors’ ongoing participation in extensive public protests against the UK’s decision to replace Trident in 2016, A Nuclear Refrain disrupts familiar academic and policy forms of writing. It is “an uncomfortable hybrid between academia and fiction,” intent on discomfiting the reader to spur the radical reimagining of a world profoundly shaped by the threat of nuclear weapons. Inspired by author and social critic Charles Dickens, this book draws on the form of A Christmas Carol. Transported by “ghosts” of the nuclear past, present and future, a pro-Trident British policy maker, the Right Honourable Roger C. Bezeeneos, has his perceptions sorely challenged. But will Roger allow his feelings to influence his decision-making? Will he recognize the yearning for empire-lost that mobilizes the British establishment? And will he admit the limiting of political participation that a commitment to nuclear deterrence determines? It’s your call, Roger."

An Outpost Of Progress

At War with Pontiac

A Sailor of Austria

Moon-Face: And Other Stories

The Go Ahead Boys on Smugglers' Island

A Century of Violence in a Red City

All Things Are Lights