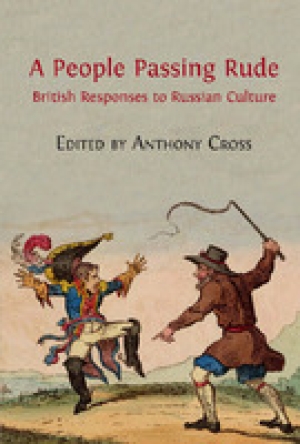 Described by the sixteenth-century English poet George Turbervile as "a people passing rude, to vices vile inclin’d", the Russians waited some three centuries before their subsequent cultural achievements—in music, art and particularly literature—achieved widespread recognition in Britain.
Download book (pdf - 4.20 MB)
This link for educational purpose only. Please remove file from your computer after familiarization.

Described by the sixteenth-century English poet George Turbervile as "a people passing rude, to vices vile inclin’d", the Russians waited some three centuries before their subsequent cultural achievements—in music, art and particularly literature—achieved widespread recognition in Britain. The essays in this stimulating collection attest to the scope and variety of Russia’s influence on British culture. They move from the early nineteenth century—when Byron sent his hero Don Juan to meet Catherine the Great, and an English critic sought to come to terms with the challenge of Pushkin—to a series of Russian-themed exhibitions at venues including the Crystal Palace and Earls Court. The collection looks at British encounters with Russian music, the absorption with Dostoevskii and Chekhov, and finishes by shedding light on Britain’s engagement with Soviet film. Edited by Anthony Cross, one of the world’s foremost authorities on Anglo-Russian relations, A People Passing Rude is essential reading for anyone with an interest in British and Russian cultures and their complex relationship.

Treasures from the bronze age of China: An exhibition from the People's Republic of China

Art in England: Notes and Studies

Us and Others: Social identities across languages, discourses and cultures (Pragmatics & Beyond New Series)

A grammar of Pichi

An Art-Lover's Guide to the Exposition: Explanations of the Architecture, Sculpture and Mural Paintings, With a Guide for Study in the Art Gallery

New Mana: Transformations of a Classic Concept in Pacific Languages and Cultures (Monographs in Anthropology)

Ethnic Dress in the United States: A Cultural Encyclopedia

A Text-Book of the History of Painting

Sculpture of the Exposition Palaces and Courts: Descriptive Notes on the Art of the Statuary at the Panama-Pacific International Exposition, San Francisco (Classic Reprint)

A Grammar of the Kabardian Language

There Are No Grown-ups A Midlife Coming-of-Age Story

Ethnology and Empire: Languages, Literature, and the Making of the North American Borderlands (America and the Long 19th Century)

The Rough Guide to Cape Town, The Winelands and the Garden Route (Rough Guides), 6th Edition