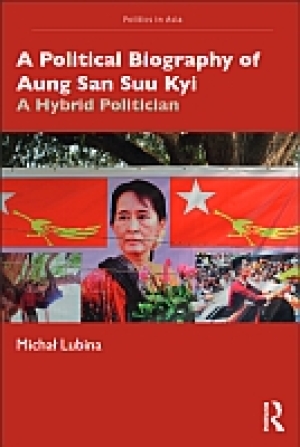 This book is the first political biography of Aung San Suu Kyi covering both her years in opposition and all her years in power from 2016 onwards. It offers a new interpretation of Aung San Suu Kyi by presenting a balanced and thorough account of Suu Kyi’s policies.
Download book (pdf - 3.11 MB)
This link for educational purpose only. Please remove file from your computer after familiarization.

This book is the first political biography of Aung San Suu Kyi covering both her years in opposition and all her years in power from 2016 onwards. It offers a new interpretation of Aung San Suu Kyi by presenting a balanced and thorough account of Suu Kyi’s policies. In the last 30 years there has not been a person in global politics who has risen so high and fallen so low – and so quickly – as Aung San Suu Kyi. Using postcolonial theory and introducing the new concept of `a hybrid politician', this book explains apparent inconsistencies of Suu Kyi’s agenda. It demonstrates that Suu Kyi considers herself a democrat and yet, rules autocratically. Immersed in her country’s tradition of policymaking, she has at the same time been influenced by foreign concepts, both Western and Asian. Drawing on first-hand research, including talks with Suu Kyi, conversations with her supporters and rivals, observations of Suu Kyi’s behaviour during intergovernmental talks as well as an extensive number of sources and fieldwork in Myanmar, the author argues that Suu Kyi’s case shows both the strengths and limits of hybridity. This brings Suu Kyi priceless political assets such as visibility, recognition and support while proving that such a model of leadership has its restrictions. A timely biography of the Nobel Peace Prize Laureate as she appears at the International Court of Justice to defend her country against charges of genocide committed against the Rohingya Muslim minority, this book will be of interest to students and researchers of Myanmar politics, Southeast Asian politics, Asian politics, Political Science more generally, Postcolonial Studies, Cultural Studies and Leadership Studies.

Crime: Its Cause and Treatment

The Political Economy of Democracy

The Death and Life of Great American Cities

A Feminist Companion to Samuel and Kings

Against the Death Penalty

My Cousin, My Husband Clans and Kinship in Mediterranean Societies

Economic Opportunities for Women in the East Asia and Pacific Region

Unbelievable: My Front-Row Seat to the Craziest Campaign in American History

Essays on International Law and Practice

Crime and its Causes (Criminology)

The Advancement of Liberty: How American Democratic Principles Transformed the Twentieth Century

A New Politics from the Left