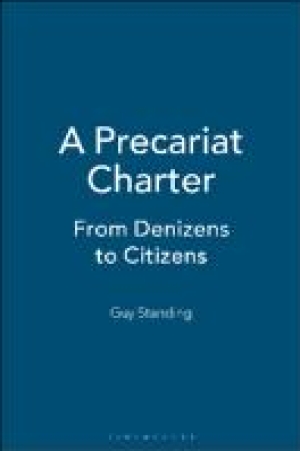 This book is available as open access through the Bloomsbury Open Access programme and is available on www.bloomsburycollections.com. Guy Standing's immensely influential 2011 book introduced the Precariat as an emerging mass class, characterized by inequality and insecurity.
Download book (pdf - 1.94 MB)
This link for educational purpose only. Please remove file from your computer after familiarization.

This book is available as open access through the Bloomsbury Open Access programme and is available on www.bloomsburycollections.com. Guy Standing's immensely influential 2011 book introduced the Precariat as an emerging mass class, characterized by inequality and insecurity. Standing outlined the increasingly global nature of the Precariat as a social phenomenon, especially in the light of the social unrest characterized by the Occupy movements. He outlined the political risks they might pose, and at what might be done to diminish inequality and allow such workers to find a more stable labour identity. His concept and his conclusions have been widely taken up by thinkers from Noam Chomsky to Zygmunt Bauman, by political activists and by policy-makers. This new book takes the debate a stage further, looking in more detail at the kind of progressive politics that might form the vision of a Good Society in which such inequality, and the instability it produces, is reduced. A Precariat Charter discusses how rights - political, civil, social and economic - have been denied to the Precariat, and argues for the importance of redefining our social contract around notions of associational freedom, agency and the commons.

A world of water: Rain, rivers and seas in Southeast Asian histories

After Tomorrow the Days Disappear

A Genealogy of Bamboo Diplomacy

Cybersecurity Ops with bash: Attack, Defend, and Analyze from the Command Line

All in the Family