A return to the village Sented by Luis 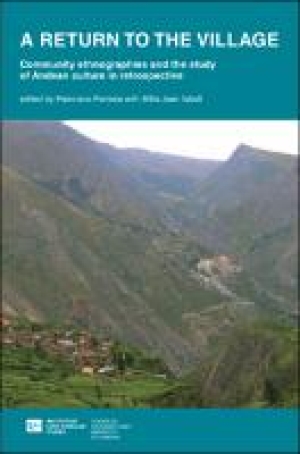 A return to the village

This edited volume brings together several scholars who have produced outstanding ethnographies of Andean communities, mostly in Peru but also in neighbouring countries.
Download book (pdf - 3.73 MB)
This link for educational purpose only. Please remove file from your computer after familiarization.

This edited volume brings together several scholars who have produced outstanding ethnographies of Andean communities, mostly in Peru but also in neighbouring countries. These ethnographies were published between the 1970s and 2000s, following different theoretical and thematic approaches, and they often transcended the boundaries of case studies to become important reference works on key aspects of Andean culture: for example, the symbolism and ritual uses of coca in the case of Catherine J. Allen; agricultural rituals and internal social divisions in the case of Peter Gose; social organisation and kinship in the case of Billie Jean Isbell; the use of khipus and concepts of literacy in the case of Frank Salomon; and the management and ritual dimensions of water and irrigation in the case of Ricardo Valderrama and Carmen Escalante. In their chapters the authors revisit their original works in the light of contemporary anthropology, focusing on different academic and personal aspects of their ethnographies. For example, they explain how they chose the communities they worked in; the personal relations they established there during fieldwork; the kind of links they have maintained; and how these communities have changed over time. They also review their original methodological and theoretical approaches and findings, reassessing their validity and explaining how their views have evolved or changed since they originally conducted their fieldwork and published their studies. This book also offers a review of the evolution and role of community ethnographies in the context of Andean anthropology. These ethnographies had a significant influence between the 1940s and 1980s, when they could be roughly divided – following Olivia Harris – between ‘long-termist’ and ‘short-termist’ approaches, depending on predominant focuses on historical continuities or social change respectively. However, by the 1990s these works came to be widely considered as too limited and subjective in the context of wider academic changes, such as the emergence of postmodern trends, and reflective and literary turns in anthropology. Overall, the book aims to reflect on this evolution of community ethnographies in the Andes, and on their contribution to the study of Andean culture.

General Consent in Jane Austen: A Study of Dialogism

Supplanting the Postmodern: An Anthology of Writings on the Arts and Culture of the Early 21st Century

Treatments for Anger in Specific Populations: Theory, Application, and Outcome