A State of Play Sented by Rebecca 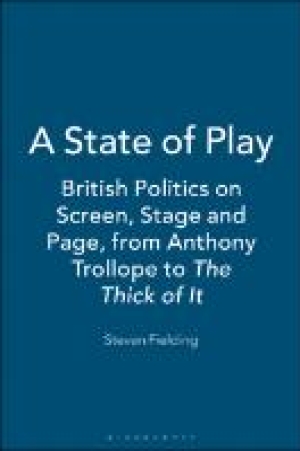 A State of Play

This book is available as open access through the Bloomsbury Open Access programme and is available on www.bloomsburycollections.com.
Download book (pdf - 2.47 MB)
This link for educational purpose only. Please remove file from your computer after familiarization.

This book is available as open access through the Bloomsbury Open Access programme and is available on www.bloomsburycollections.com. A State of Play explores how the British have imagined their politics, from the parliament worship of Anthony Trollope to the cynicism of The Thick of It. In an account that mixes historical with political analysis, Steven Fielding argues that fictional depictions of politics have played an important but insidious part in shaping how the British think about their democracy and have helped ventilate their many frustrations with Westminster. He shows that dramas and fictions have also performed a significant role in the battle of ideas, in a way undreamt of by those who draft party manifestos. The book examines the work of overtly political writers have treated the subject, discussing the novels of H.G. Wells, the comedy series Yes, Minister and the plays of David Hare. However, it also assesses how less obvious sources, such as the films of George Formby, the novels of Agatha Christie, the Just William stories and situation comedies like Steptoe and Son, have reflected on representative democracy. A State of Play is an invaluable, distinctive and engaging guide to a new way of thinking about Britain's political past and present.

The History of Genocide in Cinema: Atrocities on Screen

Narnia and the Fields of Arbol: The Environmental Vision of C. S. Lewis (Culture of the Land)

An Empire of Air and Water: Uncolonizable Space in the British Imagination, 1750-1850

Mountains on the Market: Industry, the Environment, and the South (New Directions in Southern History)

A Late Iron Age farmstead in the Outer Hebrides

Children of Hope : The Odyssey of the Oromo Slaves From Ethiopia to South Africa

Little Hawk and the Lone Wolf: A Memoir

A Norse Farmstead in the Outer Hebrides

A Global History of Convicts and Penal Colonies

Corporate Yogi: My Journey as a Spiritual Seeker and an Accidental Entrepreneur

Data + Design: A Simple Introduction to Preparing and Visualizing Information