A view to a kill Sented by Jacob 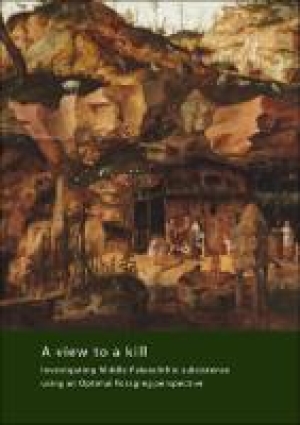 A view to a kill

The sophistication of Neanderthal behavioural strategies have been the subject of debate from the moment of their recognition as a separate species of hominin in 1856. This book presents a study on Neanderthal foraging prowess.
Download book (pdf - 3.86 MB)
This link for educational purpose only. Please remove file from your computer after familiarization.

The sophistication of Neanderthal behavioural strategies have been the subject of debate from the moment of their recognition as a separate species of hominin in 1856. This book presents a study on Neanderthal foraging prowess. Novel ethnographic and primatological insights, suggest that increasing dependence on high quality foods, such as meat, caused the brain to evolve to a large size and thus led to highly intelligent hominins. From this baseline, the author studies the Neanderthal archaeological record in order to gain insight into the “knowledge-intensity” of Neanderthal hunting behaviour. In this research, an optimal foraging perspective is applied to Pleistocene bone assemblages. According to this perspective, foraging success is an important factor in an individual’s evolutionary fitness. Therefore foraging is organised as efficiently as possible. The prey species that were selected and hunted by Neanderthals are analysed. The author investigates economic considerations that influenced Neanderthal prey choice. These considerations are based on estimates of the population densities of the available prey species and on estimates of the relative difficulty of hunting those species. The results demonstrate that when Neanderthals operated within poor environments, their prey choice was constrained: they were not able to hunt species living in large herds. In these environments, solitary species were the preferred prey. It is striking that Neanderthals successfully focussed on the largest and most dangerous species in poor environments. However, in richer environments, these constraints were lifted and species living in herds were successfully exploited. In order to assess the accuracy of this approach, bone assemblages formed by cave hyenas are also analysed. The combined results of the Neanderthal and hyena analyses show that an optimal foraging perspective provides a powerful tool to increase our understanding of Pleistocene ecology. The niches of two social carnivores of similar size, which were seemingly similar, are successfully distinguished. This result lends extra credence to the conclusions regarding Neanderthal foraging strategies. This book contributes to the debate surrounding Neanderthal competence and ability. It combines an up-to-date review of current knowledge on Neanderthal biology and archaeology, with novel approaches to the archaeological record. It is thus an important contribution to the current knowledge of this enigmatic species.

Abrahamic Reflections on Randomness and Providence

A research handbook for patient and public involvement researchers

A South African Convivio with Dante

Actors and the Art of Performance

A Quarter-Century of Normalization and Social Role Valorization

Alleys of Your Mind