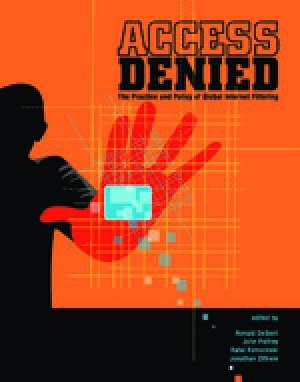 A study of Internet blocking and filtering around the world: analyses by leading researchers and survey results that document filtering practices in dozens of countries
Download book (pdf - 8.31 MB)
This link for educational purpose only. Please remove file from your computer after familiarization.

A study of Internet blocking and filtering around the world: analyses by leading researchers and survey results that document filtering practices in dozens of countries.Many countries around the world block or filter Internet content, denying access to information that they deem too sensitive for ordinary citizens—most often about politics, but sometimes relating to sexuality, culture, or religion. Access Denied documents and analyzes Internet filtering practices in more than three dozen countries, offering the first rigorously conducted study of an accelerating trend. Internet filtering takes place in more than three dozen states worldwide, including many countries in Asia, the Middle East, and North Africa. Related Internet content-control mechanisms are also in place in Canada, the United States and a cluster of countries in Europe. Drawing on a just-completed survey of global Internet filtering undertaken by the OpenNet Initiative (a collaboration of the Berkman Center for Internet and Society at Harvard Law School, the Citizen Lab at the University of Toronto, the Oxford Internet Institute at Oxford University, and the University of Cambridge) and relying on work by regional experts and an extensive network of researchers, Access Denied examines the political, legal, social, and cultural contexts of Internet filtering in these states from a variety of perspectives. Chapters discuss the mechanisms and politics of Internet filtering, the strengths and limitations of the technology that powers it, the relevance of international law, ethical considerations for corporations that supply states with the tools for blocking and filtering, and the implications of Internet filtering for activist communities that increasingly rely on Internet technologies for communicating their missions. Reports on Internet content regulation in forty different countries follow, with each two-page country profile outlining the types of content blocked by category and documenting key findings.ContributorsRoss Anderson, Malcolm Birdling, Ronald Deibert, Robert Faris, Vesselina Haralampieva [as per Rob Faris], Steven Murdoch, Helmi Noman, John Palfrey, Rafal Rohozinski, Mary Rundle, Nart Villeneuve, Stephanie Wang, Jonathan Zittrain

Access to Online Resources A Guide for the Modern Librarian