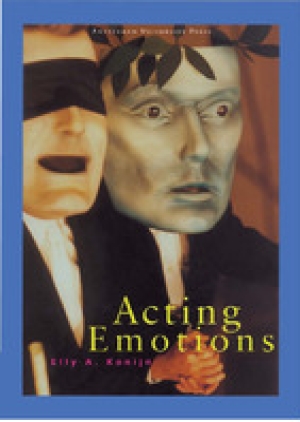 Actors and actresses play characters such as the embittered Medea, or the lovelorn Romeo, or the grieving and tearful Hecabe. The theatre audience holds its breath, and then sparks begin to fly. But what about the actor?
Download book (pdf - 7.05 MB)
This link for educational purpose only. Please remove file from your computer after familiarization.

Actors and actresses play characters such as the embittered Medea, or the lovelorn Romeo, or the grieving and tearful Hecabe. The theatre audience holds its breath, and then sparks begin to fly. But what about the actor? Has he been affected by the emotions of the character he is playing? What's going on inside his mind? The styling of emotions in the theatre has been the subject of heated debate for centuries. In fact, Diderot in his Paradoxe sur le comedien, insisted that most brilliant actors do not feel anything onstage. This greatly resembles the detached acting style associated with Bertolt Brecht, which, in turn, stands in direct opposition to the notion of the empathy-oriented "emotional reality" of the actor which is most famously associated with the American actingstyle known as method acting. The book's survey of the various dominant acting styles is followed by an analysis of the current state of affairs regarding the psychology of emotions. By uniting the psychology of emotions with contemporary acting theories, the author is able to come to the conclusion that traditional acting theories are no longer valid for today's actor. Acting Emotions throws new light on the age-old issue of double consciousness, the paradox of the actor who must nightly express emotions while creating the illusion of spontaneity. In addition, the book bridges the gap between theory and practice by virtue of the author's large-scale field study of the emotions of professional actors. In Acting Emotions, the responses of Dutch and Flemish actors is further supplemented by the responses of a good number of American actors. The book offers a unique view of how actors act out emotions and how this acting out is intimately linked to the development of contemporary theatre.