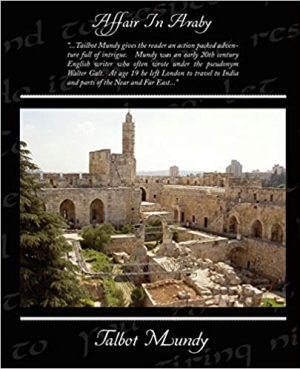 James Schuyler Grim, better known as "Jimgrim," is employed by the British secret service and stationed in Jerusalem, matching wits and weapons with the French financed conspirators out to destabilize Syrian King with a forged order to massacre the Jews of Jerusalem.
Download book (pdf - 660.03 KB)
This link for educational purpose only. Please remove file from your computer after familiarization.

ailbot Mundy gives the reader an action packed adventure full of intrigue. Mundy was an early 20th century English writer who often wrote under the pseudonym Walter Galt. At age 19 he left London to travel to India and parts of the Near and Far East. Most of Mundy's novels are set in India under British Occupation in which the loyal British officers encounter ancient Indian mysticism. In the 1920's Mundy wrote stories about Tros of fSamothrace, a Greek freedom fighter who aided Britons and Druids in their fight against Julius Caesar. Affair in Araby was also published under the title King of Check. Mundy tells an adventure tale with a hero from previous novels, James Schuyler Grim. The British in Jerusalem have employed Grim (a secret service agent form America). The French in Syria anger King Festal of the Arabs. Allies had promised Festal the kingship of Syria, Palestine and Trans-Jordanian, because of his aid in W W 1. They did not keep their promise and the French are out to discredit or kill the Arab chieftain.

Castles in the Air

Five Weeks in a Balloon

Southern Horrors: Lynch Law in All Its Phases

A Thief in the Night