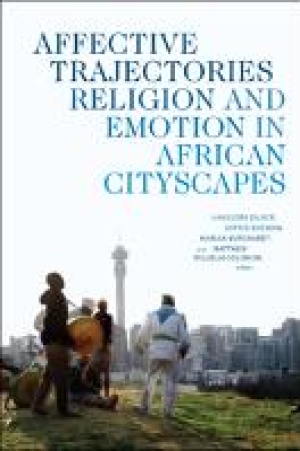 Affective Trajectories explores affective and emotional experiences as manifestations of religion in the rapidly shifting conditions of postcolonial African urban spaces and the diaspora.
Download book (pdf - 4.89 MB)
This link for educational purpose only. Please remove file from your computer after familiarization.

Affective Trajectories explores affective and emotional experiences as manifestations of religion in the rapidly shifting conditions of postcolonial African urban spaces and the diaspora. The editors define the term "affective trajectory" as the force of affect in the religious lives of individuals and communities; it is a network of people, religious forces, and material places that are established, dissolved, and remade, and a mode of articulating time-space coordinates that include, for instance, traces of the former presences of people and of encounters between believers, gods, and spirits in urban space. The chapters address diverse topics including: Apostolic Christianity in Harare; Pentecostal revivalism and Islamic reformism in Abuja; mediums of healing among Christian patients in West Africa; spiritual cleansing in a Congolese branch of a Japanese religious movement; Islam, gender, and sexuality in Zanzibar; and Christianity, family, and identity in Gaborone; among others.