Alice in Blunderland Sented by Jacob 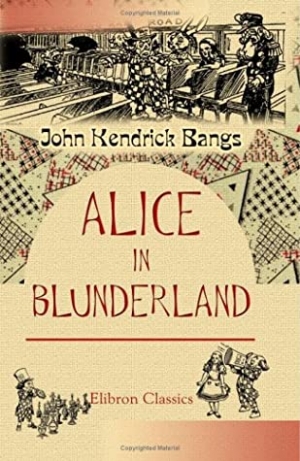 From Alice in Blunderland: “Certain of our members claim that they have a right to sell their votes for $500 apiece–”
Download book (pdf - 455.25 KB)
This link for educational purpose only. Please remove file from your computer after familiarization.

From Alice in Blunderland: “Certain of our members claim that they have a right to sell their votes for $500 apiece–”

“Mercy!” cried Alice, “Why, that is–that is terrible.”

“It certainly is,” said the March Hare ruefully, it’s rotten. Here I’ve been holding out for $1,250 for mine, and these duffers want to go in for a cut rate that will absolutely ruin the business.”

John Kendrick Bangs takes Carroll’s Alice in Wonderland and turns it into a political satire in many ways as fresh, keen and relevant today as it was a hundred years ago. (Summary by Ruth Golding)

"An Underground Best-Seller" - "Animal Farm for 21st Century Politics" - What would happen if Alice, of Wonderland fame, were dropped into a political system where the government runs every aspect of life? You would have Alice in Blunderland, a 1907 classic, brought back to life-with even more meaning for our modern times. Join Alice as she explores a city where: The town has an official beggar-who is on government salary. - Boys are required to dance with homely girls-or get arrested. - They have the safest, most fuel-efficient, mass transit system in the world-because it doesn't go anywhere. - Teeth are public property. - The Commissioner of Public Verse has 16,743 poets working for him-and words that don't rhyme are made to rhyme by civic decree. - And, the official government monetary policy is expressed as follows: We promise to pay / This bond some day / If of the stuff / We've got enough. / And if we haven't, pray don't despond, / For we'll pay it off with another bond. - "This would be one of the funniest political satires I've ever read-if it weren't so close to current reality."

The City in the Clouds

The Adventures of Puss in Boots, Jr.

More Tales in the Land of Nursery Rhyme

The Giant Hands or, the Reward of Industry