Allan and the Holy Flower Sented by Jacob 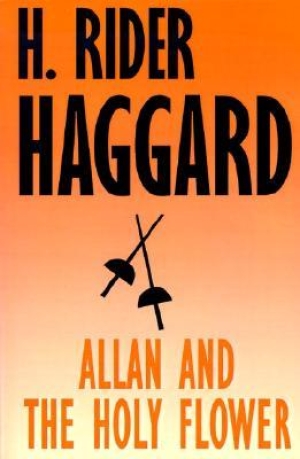 "Almost from the outset of his career, Sir Rider Haggard has made use of Allan Quatermain both as a hero, and as a chronicler. He took part in his earliest stories, and he is taking part in his latest... As a middle-aged man, he recounts the happenings of a dangerous expedition into the heart of Africa in search of an orchid of wondrous beauty... More is at stake during the progress of the story than the quest of the marvelous orchid. It appears some time after the tale is well under way that the custodian of this sacred floral god of the Pongos is a white woman, and that she may be the vanished wife of John Eversley.
Download book (pdf - 1.32 MB)
This link for educational purpose only. Please remove file from your computer after familiarization.

Allan and the Holy Flower is a 1915 novel by H. Rider Haggard featuring Allan Quatermain. It first appeared serialised in The Windsor Magazine from issue 228 to 239, illustrated by Maurice Greiffenhagen, and in New Story Magazine from December 1913 through June 1914.

Brother John, who has been living in Africa for many years, gives Allan Quatermain the largest orchid he has ever seen. Later, in England, he has a meeting with Mr. Somers, an orchid collector who is prepaired to finance an expedition to search for the plant. Join Allan as he sets out to find this rare orchid ... and finds something more.

Excerpt:
Now I, the listener, thought for a moment or two. The words of this fighting savage, Mavovo, even those of them of which I had heard only the translation, garbled and beslavered by the mean comments of the unutterable Sammy, stirred my imagination. Who was I that I should dare to judge of him and his wild, unknown gifts? Who was I that I should mock at him and by my mockery intimate that I believed him to be a fraud?

Love Poems and Others

Tom Swift and His Motorcycle

Jeanne d'Arc Her Life and Death

Back to God's Country: And Other Stories

Tom Swift and His Submarine Boat

Tom Swift and His Giant Cannon

10% Happier: How I Tamed the Voice in My Head, Reduced Stress Without Losing My Edge, and Found Self-Help That Actually Works
Book Detail
Category Author
Latest Downloads