An Antarctic Mystery or, The Sphinx of the Ice Fields Sented by Sarah Gerdes 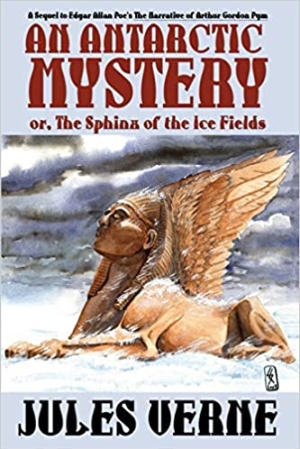 An Antarctic Mystery or, The Sphinx of the Ice Fields

A sequel to Edgar Allan Poe's The Narrative of A. Gordon Pym. English translation by Mrs. Cashel Hoey.
Download book (pdf - 833.80 KB)
This link for educational purpose only. Please remove file from your computer after familiarization.

During his twilight years, the French author Jules Verne (1828-1905) wrote two original sequels to books that had fired his own youthful imagination but which he felt to be incomplete: Johann Wyss's Swiss Family Robinson and Edgar Allan Poe's The Narrative of Arthur Gordon Pym of Nantucket. Arthur Gordon Pym (1845) was only one of many Poe stories which Verne admired; no other single author had more impact on his writing. Verne acknowledged this debt in his only major piece of literary criticism, a detailed 1864 article entitled 'Edgard [sic] Poe and His Work.' Poe (1809-1849) was just emerging on the French literary scene in translation as Verne was writing his first plays and short stories. Verne was familiar with a broad range of Poe's works, the well-remembered stories as well as many that are obscure today. What is to be admired in Poe, Verne wrote, 'are the novelties of his situations, the discussion of little-known facts, the observations of the unhealthy faculties of Mankind, the choice of subject-matter, the ever-strange personality of his characters, their nervous, sickly temperaments, their ways of expressing themselves by bizarre interjections. And yet, among all these improbabilities, exists at times a verisimilitude that grips the credulity of the reader.'

Tom Swift and His Aerial Warship

An Incident on Route 12

'Moon-Face' and Other Stories