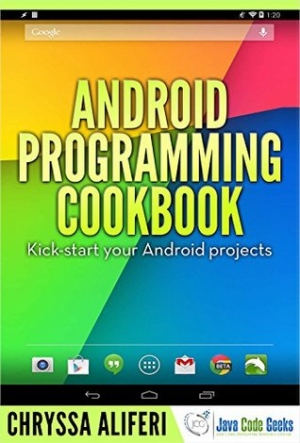 Android is a mobile operating system developed by Google, based on the Linux kernel and designed primarily for touchscreen mobile devices such as smartphones and tablets.
Download book (pdf - 8.22 MB)
This link for educational purpose only. Please remove file from your computer after familiarization.

Android is a mobile operating system developed by Google, based on the Linux kernel and designed primarily for touchscreen mobile devices such as smartphones and tablets. Android’s user interface is mainly based on direct manipulation, using touch gestures that loosely correspond to real-world actions, such as swiping, tapping and pinching, to manipulate on-screen objects, along with a virtual keyboard for text input.
In addition to touchscreen devices, Google has further developed Android TV for televisions, Android Auto for cars, and Android Wear for wrist watches, each with a specialized user interface. Variants of Android are also used on notebooks, game consoles, digital cameras, and other electronics.
Android has the largest installed base of all operating systems of any kind. Android has been the best selling OS on tablets since 2013, and on smartphones it is dominant by any metric.
In this ebook, we provide a compilation of Android programming examples that will help you kick-start your own web projects. We cover a wide range of topics, fromServices and Views, to GoogleMaps and Bluetooth functionality. With our straightforward tutorials, you will be able to get your own projects up and running in minimum time.