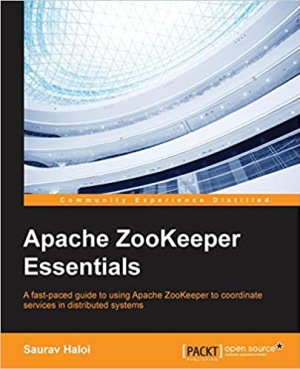 Understand how Apache ZooKeeper solves coordination issues in traditional distributed systems Discover steps to set up and get started with ZooKeeper in a development environment in addition to production Explore ZooKeeper's architecture and internals Get to grips with the API model of ZooKeeper to start programming Use ZooKeeper to solve common distributed coordination tasks such as leader election, distributed queues, and group memberships Administer Apache ZooKeeper for real-world use and production workload Investigate the use of ZooKeeper in real-world applications and services
Download book (pdf - 2.50 MB)
This link for educational purpose only. Please remove file from your computer after familiarization.

Starting with how to install, configure, and begin with ZooKeeper, we'll examine the intricacies of ZooKeeper's architecture and internals. Next, you'll learn ZooKeeper's programming model and write code to solve common distributed coordination tasks. We'll also walk you through administering ZooKeeper in a production environment, before finally covering practical examples of real-world projects and services using ZooKeeper to solve complex day-to-day problems.

The Homesteader's Herbal Companion: The Ultimate Guide to Growing, Preserving, and Using Herbs Sented by Michael