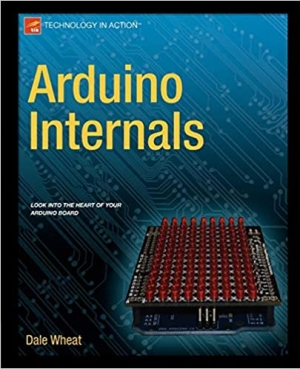 Arduino Internals guides you to the heart of the Arduino board. Author Dale Wheat shares his intimate knowledge of the Arduino board―its secrets, its strengths and possible alternatives to its constituent parts are laid open to scrutiny in this book. You'll learn to build new, improved Arduino boards and peripherals, while conforming to the Arduino reference design.
Download book (pdf - 6.66 MB)
This link for educational purpose only. Please remove file from your computer after familiarization.

Arduino Internals guides you to the heart of the Arduino board. Author Dale Wheat shares his intimate knowledge of the Arduino board―its secrets, its strengths and possible alternatives to its constituent parts are laid open to scrutiny in this book. You'll learn to build new, improved Arduino boards and peripherals, while conforming to the Arduino reference design.

Arduino Internals begins by reviewing the current Arduino hardware and software landscape. In particular, it offers a clear analysis of how the ATmega8 board works and when and where to use its derivatives. The chapter on the "hardware heart" is vital for the rest of the book and should be studied in some detail.

Furthermore, Arduino Internals offers important information about the CPU running the Arduino board, the memory contained within it and the peripherals mounted on it. To be able to write software that runs optimally on what is a fairly small embedded board, one must understand how the different parts interact. Later in the book, you'll learn how to replace certain parts with more powerful alternatives and how to design Arduino peripherals and shields.

Since Arduino Internals addresses both sides of the Arduino hardware-software boundary, the author analyzes the compiler toolchain and again provides suggestions on how to replace it with something more suitable for your own purposes. You'll also learn about how libraries enable you to change the way Arduino and software interact, and how to write your own library implementing algorithms you've devised yourself. Arduino Internals also suggests alternative programming environments, since many Arduino hackers have a background language other than C or Java.

Of course, it is possible to optimize the way in which hardware and software interact―an entire chapter is dedicated to this field.

Arduino Internals doesn't just focus on the different parts of Arduino architecture, but also on the ways in which example projects can take advantage of the new and improved Arduino board. Wheat employs example projects to exemplify the hacks and algorithms taught throughout the book.

Arduino projects straddling the hardware-software boundary often require collaboration between people of different talents and skills which cannot be taken for granted. For this reason, Arduino Internals contains a whole chapter dedicated to collaboration and open source cooperation to make those tools and skills explicit.

One of the crowning achievements of an Arduino hacker is to design a shield or peripheral residing on the Arduino board, which is the focus of the following chapter. A later chapter takes specialization further by examining Arduino protocols and communications, a field immediately relevant to shields and the communication between peripherals and the board.

Finally, Arduino Internals integrates different skills and design techniques by presenting several projects that challenge you to put your newly-acquired skills to the test!

Programming Arduino Getting Started with Sketches

Arduino Projects to Save the World

Building Arduino Projects for the Internet of Things: Experiments with Real-World Applications