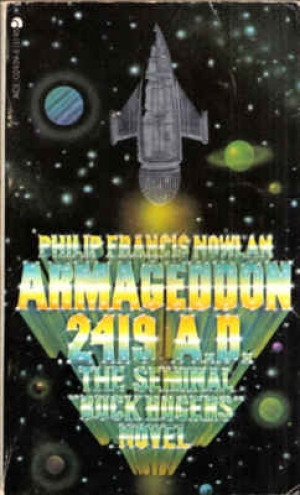 The original "Buck Rogers" story -- Nowlan’s novella tells about America in the 25th century, conquered by Hans in 2109 A.D. and only now beginning to rebel. The Hans are invaders from Asia with highly advanced technology. They have great aircraft armed with disintegrator rays that turn whatever they hit into nothing. From time to time, they raid American land "to keep the 'wild' Americans on the run within the shelter of their forests, and prevent their becoming a menace to the Han civilization." (Summary from Wikipedia).
Download book (pdf - 556.54 KB)
This link for educational purpose only. Please remove file from your computer after familiarization.

Elsewhere I have set down, for whatever interest they have in this, the 25th Century, my personal recollections of the 20th Century. Now it occurs to me that my memoirs of the 25th Century may have an equal interest 500 years from now—particularly in view of that unique perspective from which I have seen the 25th Century, entering it as I did, in one leap across a gap of 492 years. This statement requires elucidation. There are still many in the world who are not familiar with my unique experience. Five centuries from now there may be many more, especially if civilization is fated to endure any worse convulsions than those which have occurred between 1975 A.D. and the present time. I should state therefore, that I, Anthony Rogers, am, so far as I know, the only man alive whose normal span of eighty-one years of life has been spread over a period of 573 years. To be precise, I lived the first twenty-nine years of my life between 1898 and 1927; the other fifty-two since 2419. The gap between these two, a period of nearly five hundred years, I spent in a state of suspended animation, free from the ravages of katabolic processes, and without any apparent effect on my physical or mental faculties.

The Dance (by An Antiquary) - Historic Illustrations of Dancing from 3300 B.C. to 1911 A.D.
Book Detail
Category Author
Latest Downloads