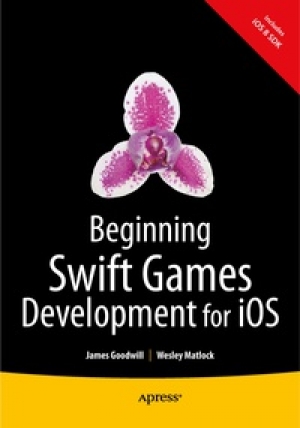 Game apps are one of the most popular categories in the Apple iTunes App Store. Well, the introduction of the new Swift programming language will make game development even more appealing and easier to existing and future iOS app developers. In response, James Goodwill, Wesley Matlock and Apress introduce you to this book, Beginning Swift Games Development for iOS. In this book, you’ll learn the fundamental elements of the new Swift language as applied to game development for iOS.

In part 1, you’ll start with a basic 2D game idea and build the game throughout the book introducing each SpriteKit topic as we add new functionality to the game. By the end of the book, you’ll have experience with all the important SpriteKit topics and have a fully functional game as a result. In part 2 of this book, you’ll learn 3D game development using Apple’s SceneKit framework and the Swift programming language. And, you’ll follow the same pattern we used for part 1.

After reading and using this book, you’ll have the skills and the code to build your first 2D and then 3D game app that you can run on any iOS enabled device and perhaps sell in the Apple iTunes App Store.

Graphics and Animation on iOS

Learn Objective-C on the Mac For OS X and iOS, 2nd Edition