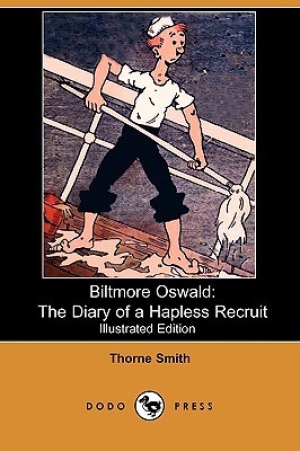 "Buddy" is the "Dere Mable" of the navy, with a little more knowledge of spelling and even poetic aspirations, but positively no comprehension of naval affairs. Amusing, but will probably not be as popular as its army parallel.
Download book (pdf - 661.76 KB)
This link for educational purpose only. Please remove file from your computer after familiarization.

James Thorne Smith Jr. (1892-1934), was an American writer of humorous supernaturnal fantasy fiction. Best known today for his creation of Topper, Smith's comic fantasy fiction (most of it involving sex, lots of drinking, and supernatural transformations, and aided by racy illustrations) sold millions of copies in the early 1930s. Smith drank as steadily as his characters; his appearance in James Thurber's The Years With Ross involves an unexplained week-long disappearance. Smith was born in Annapolis, Maryland the son of a Navy commodore, attended Dartmouth College, and after hungry years in Greenwich Village working part-time as an advertising agent, Smith achieved meteoric success with the publication of Topper in 1926. His other works include: The Stray Lamb (1929), Turnabout (1931), The Night Life of the Gods (1931), Topper Takes a Trip (1932), The Bishop's Jaegers (1932), Rain in the Doorway (1933), Skin and Bones (1933) and The Glorious Pool (1934). He died of a heart attack while vacationing in Florida.