Bred of the Desert Sented by Sarah Gerdes 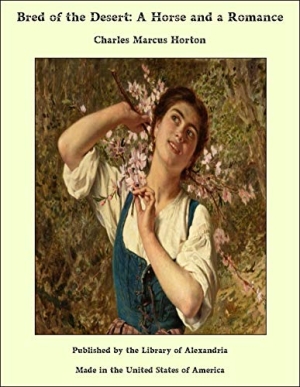 Bred of the Desert

This novel contains an abundance of human incidents and romance.
Download book (pdf - 955.05 KB)
This link for educational purpose only. Please remove file from your computer after familiarization.

It was high noon in the desert, but there was no dazzling sunlight. Over the earth hung a twilight, a yellow-pink softness that flushed across the sky like the approach of a shadow, covering everything yet concealing nothing, creeping steadily onward, yet seemingly still, until, pressing low over the earth, it took on changing color, from pink to gray, from gray to black–gloom that precedes tropical showers. Then the wind came–a breeze rising as it were from the hot earth–forcing the Spanish dagger to dipping acknowledgment, sending dust-devils swirling across the slow curves of the desert–and then the storm burst in all its might. For this was a storm–a sand-storm of the Southwest. Down the slopes to the west billowed giant clouds of sand. At the bottom these clouds tumbled and surged and mounted, and then, resuming their headlong course, swept across the flat land bordering the river, hurtled across the swollen Rio Grande itself, and so on up the gentle rise of ground to the town, where they swung through the streets in ruthless strides–banging signs, ripping up roofings, snapping off branches–and then lurched out over the mesa to the east. Here, as if in glee over their escape from city confines, they redoubled in fury and tore down to earth–and enveloped Felipe Montoya, a young and good-looking Mexican, and his team of scrawny horses plodding in a lumber rigging, all in a stinging swirl. “Haya!” cried Felipe, as the first of the sand-laden winds struck him, “Chivos–chivos!” And he shot out his whip, gave the lash a twist over the off mare, and brought it down with a resounding thwack. “R-run!” he snarled, and again brought the whip down upon the emaciated mare. “You joost natural lazy! Thees storm–we–we get-tin’–” His voice was carried away on the swirling winds. But the horses seemed not to hear the man; nor, in the case of the off mare, to feel the bite of his lash. They continued to plod along the beaten trail, heads drooping, ears flopping, hoofs scuffling disconsolately. Felipe, accompanying each outburst with a mighty swing of his whip, swore and pleaded and objurgated and threatened in turn. But all to no avail. The horses held stolidly to their gait, plodding–even, after a time, dropping into slower movement. Whereat Felipe, abandoning all hope, flung down reins and whip, and leaped off the reach of the rigging. Prompt with the loosened lines the team came to a full stop; and Felipe, snatching up a blanket, covered his head and shoulders with it and squatted in the scant protection of a forward wheel. The storm whipped and howled past. Felipe listened, noting each change in its velocity as told by the sound of raging gusts outside, himself raging. Once he lifted a corner of the blanket and peered out–only to suffer the sting of a thousand needles. Again, he hunched his shoulders guardedly and endeavored to roll a cigarette; but the tempestuous blasts discouraged this also, and with a curse he dashed the tobacco from him. After that he remained still, listening, until he heard an agreeable change outside. The screeching sank to a crooning; the crooning dropped to a low, musical sigh. Flinging off the blanket, he rose and swept the desert with eyes sand-filled and blinking. The last of the yellow winds was eddying slowly past. All about him the air, thinning rapidly, pulsated in the sun’s rays, which, beaming mildly down upon the desert, were spreading everywhere in glorious sheen. To the east, the mountains, stepping forth in the clearing atmosphere, lay revealed in a warmth of soft purple; while the slopes to the west, over which the storm had broken, shone in a wealth of dazzling yellow-white light–sunbeams scintillating off myriads of tiny sand-cubes. The desert was itself again–bright, resplendent-gripped in the clutch of solitude.

The Valor of Cappen Varra

Key Out of Time

The Rules of the Game

The Triumph of the Scarlet Pimpernel

The Voice of the Pack

Allan And The Ice-Gods: A Tale Of Beginnings