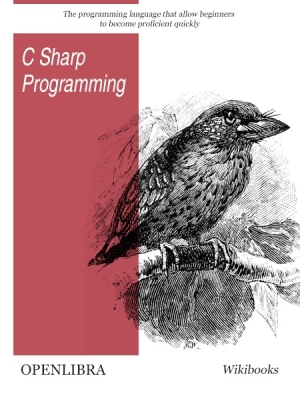 Although C# is derived from the C programming language, it has features such as garbage collection that allow beginners to become proficient in C# more quickly than in C or C++.
Download book (pdf - 1.41 MB)
This link for educational purpose only. Please remove file from your computer after familiarization.

Although C# is derived from the C programming language, it has features such as garbage collection that allow beginners to become proficient in C# more quickly than in C or C++. Similar to Java, it is object-oriented, comes with an extensive class library, and supports exception handling, multiple types of polymorphism, and separation of interfaces from implementations. Those features, combined with its powerful development tools, multi-platform support, and generics, make C# a good choice for many types of software development projects: rapid application development projects, projects implemented by individuals or large or small teams, Internet applications, and projects with strict reliability requirements. Testing frameworks such as NUnit make C# amenable to test-driven development and thus a good language for use with Extreme Programming (XP). Its strong typing helps to prevent many programming errors that are common in weakly typed languages. Because of this similarities to other languages, it is possible to introduce C# as a language with features of C++ having the programming style of Java and the rapid application model of BASIC.

A large part of the power of C# (as with other .NET languages), comes with the common .NET Framework API, which provides a large set of classes, including ones for encryption, TCP/IP socket programming, and graphics. Developers can thus write part of an application in C# and another part in another .NET language (e.g. VB.NET), keeping the tools, library, and object-oriented development model while only having to learn the new language syntax.

Algorithms to Live By: The Computer Science of Human Decisions