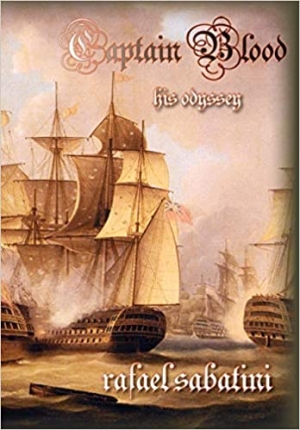 The sharp-witted Dr. Peter Blood, an Irish physician, is convicted of treason in the aftermath of the Monmouth rebellion in 1685, and enslaved on the Caribbean island of Barbados. After his daring escape he becomes a pirate, driven to revenge his enslavement and clear his name.
Download book (pdf - 1.17 MB)
This link for educational purpose only. Please remove file from your computer after familiarization.

Captain Blood: His Odyssey (1922) by Rafael Sabatini is just possibly the novel that gave rise to the modern definition of a gentleman pirate.

Peter Blood, an honest man of true character and a humane doctor, is wrongfully imprisoned for treason under the laws of King James, and deported from Britain to a tropical colony at Bridgetown where he is sold as a slave at auction. Soon he encounters romantic inspiration, conflict, injustice, and ultimately finds himself in charge of an armada of pirate ships of various flags and national alliances, becoming the famous and invincible Captain Blood, the most honorable and remarkable buccaneer throughout the South Seas.

This classic romantic pirate tale has been immortalized in a dashing movie starring Errol Flynn.