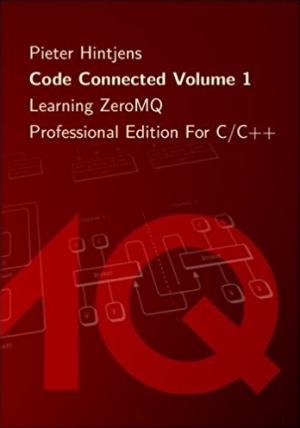 ØMQ (also known as ZeroMQ, ØMQ, or zmq) looks like an embeddable networking library but acts like a concurrency framework.
Download book (pdf - 19.29 MB)
This link for educational purpose only. Please remove file from your computer after familiarization.

ØMQ (also known as ZeroMQ, ØMQ, or zmq) looks like an embeddable networking library but acts like a concurrency framework. It gives you sockets that carry atomic messages across various transports like in-process, inter-process, TCP, and multicast. You can connect sockets N-to-N with patterns like fan-out, pub-sub, task distribution, and request-reply. It’ s fast enough to be the fabric for clustered products. Its asynchronous I/O model gives you scalable multicore applications, built as asynchronous message-processing tasks. It has a score of language APIs and runs on most operating systems. ØMQ is from iMatix1 and is LGPLv3 open source.

We took a normal TCP socket, injected it with a mix of radioactive isotopes stolen from a secret Soviet atomic research project, bombarded it with 1950-era cosmic rays, and put it into the hands of a drug-addled comic book author with a badly-disguised fetish for bulging muscles clad in spandex (see figure 1). Yes, ØMQ sockets are the world-saving superheroes of the networking world.

Cracking Codes with Python: An Introduction to Building and Breaking Ciphers

No Bugs!: Delivering Error-Free Code in C and C++

Learning to Code with C