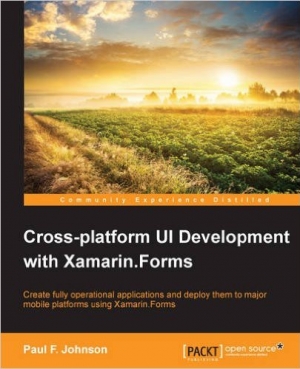 Create a fully operating application and deploy it to major mobile platforms using Xamarin.Forms
Download book (pdf - 7.66 MB)
This link for educational purpose only. Please remove file from your computer after familiarization.

Xamarin is an IDE used for the development of native iOS, Android, and Windows, and cross-platform mobile applications in C#. For the mobile developer, that means learning three different languages to create the same application. Even if you use the Xamarin toolchain, you still need to work with three different user interface construction sets. Xamarin is essentially a container in which developers can write any application in C# and use the Xamarin compiler to package and deploy on Android, iOS, or Windows platforms. To top this, Xamarin.Forms plays the role of a single codebase for mobile applications.

This book will show you, with fully-coded examples, how to use both the Xamarin toolchain and the Xamarin.Forms library to code once for the three platforms. It goes from the concept and design of a mobile messenger application to its execution. You will be introduced to Messenger―the messaging app―which includes key features such as push notifications, UI, maps, databases, and web services. Next, you will learn to plan the UI using Xamarin.Forms for cross-mobile platform development, and move on to creating custom buttons, extending the UI, and connecting to social sites such as Facebook and Twitter.

You will also learn about the limitations of PCL libraries and how they make coding easier. This will be followed by the creation of a SQLite database and a database manager, and the SQLite database’s reflection within the database manager. You will then be taken through the use of hardware features with ample coverage of iOS, Android, and Windows Mobile. Finally, the book will conclude by introducing common strategies that allow you to create applications that “just work” without having to reinvent the wheel each time.