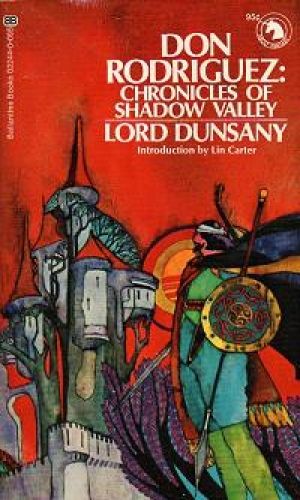 Download book (pdf - 757.52 KB)
This link for educational purpose only. Please remove file from your computer after familiarization.

for he added Spanish words that correspond in our depraved and decadent language of to-day to such words as "top dog," "nut" and "boss," so that his speech had a certain grace about it in that far-away time in Spain.

I have said that Rodriguez seldom concerned himself with the past, but considered chiefly the future: it was of the future that he was thinking now as he asked Morano this question:

"Why did my worthy and entirely excellent host shut his door in my face?"

"He then bolted it and found it necessary to put the chains back, doubtless for some good reason."

"Yes," said Morano thoughtfully, and looking at Rodriguez, "and so he might. He must have liked you."

Verily Rodriguez was just the young man to send out with a sword and a mandolin into the wide world, for he had much shrewd sense. He never pressed a point, but when something had been said that might mean much he preferred to store it, as it were, in his mind and pass on to other