Doom of the House of Duryea Sented by Jacob 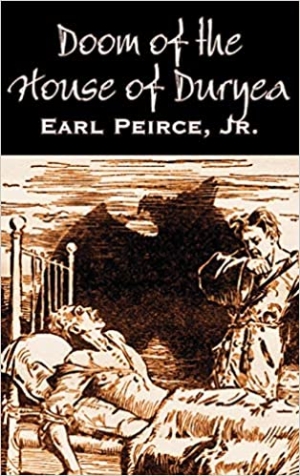 Doom of the House of Duryea

A powerful story of stark horror, and the dreadful thing that happened in a lone house in the Maine woods.
Download book (pdf - 297.42 KB)
This link for educational purpose only. Please remove file from your computer after familiarization.

Arthur Duryea, a young, handsome man, came to meet his father for the first time in twenty years. As he strode into the hotel lobby -- long strides which had the spring of elastic in them -- idle eyes lifted to appraise him, for he was an impressive figure, somehow grim with exaltation.

The desk clerk looked up with his habitual smile of expectation; how-do-you-do-Mr.-so-and-so, and his fingers strayed to the green fountain pen which stood in a holder on the desk. He looked uncertain -- he looked, perhaps, afraid. With good cause.

"Then you've been following my work?" the younger man -- the son -- asked. "Yes, Arthur; I've received monthly reports ever since you left me. From now on, son, we shall be the closest of companions -- unless your Aunt Cecilia has succeeded in her terrible mission." The mention of that name caused an unfamiliar chill to come between the two men. It stood for something, in each of them, which gnawed their minds like a malignancy. But to the younger Duryea, in his intense effort to forget the awful past, her name as well as her madness must be forgotten. "Cecilia is dead, and her silly superstition is dead also. From now on, Dad, we're going to enjoy life as we should. Bygones are really bygones in this case." But Cecilia was not dead. Some things -- some people -- are not that easy to be done with.

Some Haunted Houses of England & Wales