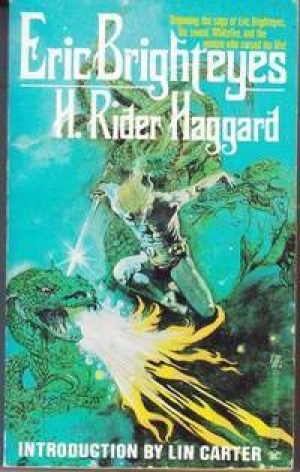 The adventures of a viking in 10th century Iceland.
Download book (pdf - 1.20 MB)
This link for educational purpose only. Please remove file from your computer after familiarization.

The Saga of Eric Brighteyes is the title of an epic Viking novel by H. Rider Haggard, and concerns the adventures of its eponymous principal character in 10th century Iceland. Eric Thorgrimursson (nicknamed "Brighteyes" for his most notable trait), strives to win the hand of his beloved, Gudruda the Fair. Her father Asmund, a priest of the old Norse gods, opposes the match, thinking Eric a man without prospects. But deadlier by far are the intrigues of Swanhild, Gudruda's half-sister and a sorceress who desires Eric for herself. She persuades the chieftain Ospakar Blacktooth to woo Gudrida, making the two men enemies. Battles, intrigues, and treachery follow.

Excerpt from Eric Brighteyes
Madam,
You have graciously conveyed to me the intelligence that during the weary weeks spent far from his home - in alternate hope and fear, in suffering and mortal trial - a Prince whose memory all men must reverence, the Emperor Frederick, found pleasure in the reading of my stories: that "they interested and fascinated him."
While the world was watching daily at the bedside of your Majesty's Imperial husband, while many were endeavouring to learn courage in our supremest need from the spectacle of that heroic patience, a distant writer little knew that it had been his fortune to bring to such a sufferer an hour's forgetfulness of sorrow and pain.
The knowledge, to an author, is far dearer than any praise, and it is in gratitude that, with your Majesty's permission, I venture to dedicate to you the tale of "Eric Brighteyes."