Erlang and Elixir for Imperative Programmers Sented by Shon 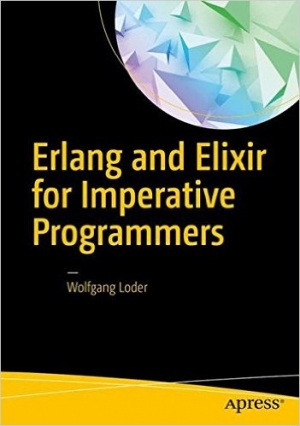 Erlang and Elixir for Imperative Programmers

Erlang and Elixir for Imperative Programmers
Download book (pdf - 13.14 MB)
This link for educational purpose only. Please remove file from your computer after familiarization.

Learn and understand Erlang and Elixir and develop a working knowledge of the concepts of functional programming that underpin them. This book takes the author’s experience of taking on a project that required functional programming and real-time systems, breaks it down, and organizes it. You will get the necessary knowledge about differences to the languages you know, where to start, and where to go next.

Have you been told by your customer or manager that they heard good things about Erlang, you should use it for the next project? Never had to deal with functional programming or real-time systems? In 2014, the author, Wolfgang Loder, developed a repository for digital assets that had to deliver those assets in binary form quickly and reliably, being able to deal with at least hundreds of requests per second.

Since he could decide the architecture and software stack of the solution, he immediately thought of Erlang and its libraries and started to evaluate this option. It was not long after that he discovered Elixir, which sits on top of the Erlang virtual machine and has features more palatable for non-functional programmers, although it is a functional programming language itself.Erlang and Elixir for Imperative Programmers gives you a basis for deciding whether the effort is viable for your next project. This book is partly a tale of the author’s own experience and partly a description of the bigger and more subtle differences between Erlang/Elixir and languages such as C++, Java, and C#

The 5 Second Rule_ Transform your Life, Work, and Confidence with Everyday Courage

100 Business Tools for Success: All the management models that matter in 500 words or less Sented by Christopher