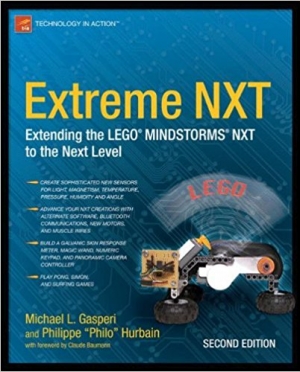 Extending the LEGO MINDSTORMS NXT to the Next Level
Download book (pdf - 11.02 MB)
This link for educational purpose only. Please remove file from your computer after familiarization.

Although LEGO MINDSTORMS NXT allows anyone to build complex inventions, there are limits to what you can do with what comes inside the box. This book shows you how to advance the NXT with more than 45 exciting projects that include creating a cool magic wand that writes words in thin air, building a remotely guided vehicle, and constructing sophisticated robots that can sense color, light, temperature, and more. All projects are explained with easy-to-follow, step-by-step instructions, so you’ll be able to create them successfully whether you’re a novice or an expert. This book also shows you how to expand the programming software and use the alternative language NXC.

New input devices―such as keypads, sensors, and even the human body―are covered, along with fun games such as surfing, PONG, and SIMON. On the serious side, there are classic engineering challenges such as controlling an inverted pendulum, making a robot that follows a wall, and building several light-seeking vehicles. Some projects are just entertaining, such as the Etch-A-NXT; others are useful, such as a motorized camera mount that takes panoramic photographs.

This second edition accounts for the important changes found in the next generation NXT, and it also covers the original concepts in greater depth. Details are presented for practically unlimited expansion of the NXT inputs and outputs by using the I2C communications bus, and several power amplifier designs allow the NXT outputs to drive bigger motors. Instructions are also included for adapting LEGO Power Functions motors to work directly with the NXT.

Learn Objective-C on the Mac For OS X and iOS, 2nd Edition