For the Liberty of Texas Sented by Emma 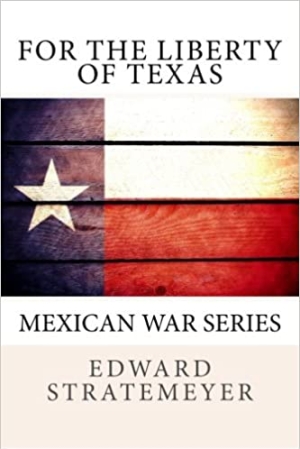 For the Liberty of Texas

Primarily the struggle of the Texans for freedom did not form a part of our war with Mexico, yet this struggle led up directly to the greater war to follow, and it is probably a fact that, had the people of Texas not at first accomplished their freedom, there would have been no war between the two larger republics.
Download book (pdf - 886.37 KB)
This link for educational purpose only. Please remove file from your computer after familiarization.

Much is told here of Sam Houston, Davy Crockett, Colonel Bowie, and other Texan heroes in connection with the entertaining story of the fortunes of two brothers, Dan and Ralph Radbury. The fall of the Alamo is introduced, and other famous incidents.

"There are few live boys in the country who have not read the intensely interesting books of Mr. Stratemeyer, and who do not have a warm place in their hearts for him. No living American writer of boys' books is so widely read, and none so sure of a cordial welcome for everything that comes from his pen."--Chicago News

“The chief charm of Mr. Stratemeyer’s stories lies in the fact that an enormous quantity of valuable information, collected from the most reliable sources, is deftly woven into the narrative without taking away from the interest.” -Philadelphia Inquirer

“Boys are attracted to the stories by Edward Stratemeyer.” -Cleveland Plain Dealer

“There are few authors whose books have so wide and so thoroughly satisfactory a reading as those by Mr. Stratemeyer.” -Boston Courier

“We unreservedly recommend Mr. Stratemeyer’s books for boys. They are wholesome, accurate so to historical details, and always interesting.” -Boston Globe

"For the Liberty of Texas" is a tale complete in itself, but it forms the first of a line of three volumes to be known under the general title of the "Mexican War Series." Primarily the struggle of the Texans for freedom did not form a part of our war with Mexico, yet this struggle led up directly to the greater war to follow, and it is probably a fact that, had the people of Texas not at first accomplished their freedom, there would have been no war between the two larger republics. The history of Texas and her struggle for liberty is unlike that of any other State in our Union, and it will be found to read more like a romance than a detail of facts. Here was a territory, immense in size, that was little better than a wilderness, a territory gradually becoming settled by Americans, Mexicans, Spaniards, French, and pioneers of other nations, a territory which was the home of the bloodthirsty Comanche and other Indians, and which was overrun with deer, buffalo, and the wild mustang, and which was, at times, the gathering ground for the most noted desperadoes of the southwest.

The Misfortunes of Virtue and Other Early Tales (Oxford World's Classics)

The Girl with the Golden Eyes

The Forest of Swords

The Brother of Daphne

Tarzan and the City of Gold

Then She Was Gone: A Novel