From Out the Vasty Deep Sented by Rebecca 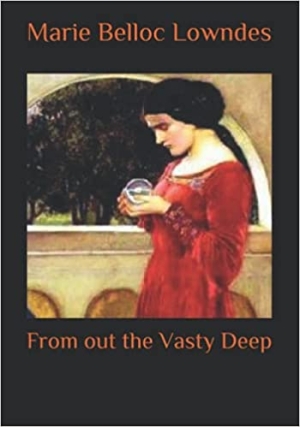 Love, ghosts, mystery and a sense of impending horror are the ingredients of this story which is interesting and readable enough but hardly as convincing as some by the same author.
Download book (pdf - 966.08 KB)
This link for educational purpose only. Please remove file from your computer after familiarization.

"I always thought that you, Pegler, were such a very sensible woman." The words were said in a good-natured, though slightly vexed tone; and a curious kind of smile flitted over the rather grim face of the person to whom they were addressed. "I've never troubled you before in this exact way, have I, ma'am?" "No, Pegler. That you certainly have not." Miss Farrow looked up from the very comfortable armchair where she was sitting—leaning back, with her neatly shod, beautifully shaped feet stretched out to the log fire. Her maid was standing a little to the right, her spare figure and sallow face lit up by the flickering, shooting flames, for the reading-lamp at Miss Farrow's elbow was heavily shaded. "D'you really mean that you won't sleep next door to-night, Pegler?" "I wouldn't be fit to do my work to-morrow if I did, ma'am." And Miss Farrow quite understood that that was Pegler's polite way of saying that she most definitely did refuse to sleep in the room next door. "I wish the ghost had come in here, instead of worrying you!" As the maid made no answer to this observation, her mistress went on, turning round so that she could look up into the woman's face: "What was it exactly you did see, Pegler?" And as the other still remained silent, Miss Farrow added: "I really do want to know! You see, Pegler—well, I need hardly tell you that I have a very great opinion of you." And then, to the speaker's extreme surprise, there came a sudden change over Pegler's face. Her pale countenance flushed, it became discomposed, and she turned her head away to hide the springing tears. Miss Farrow was touched; as much touched as her rather hard nature would allow her to be. This woman had been her good and faithful friend, as well as servant, for over twelve years. She sprang up from her deep chair with the lightness of a girl, though she was over forty; and went and took the other's hand. "Pegler!" she exclaimed. "What's the matter, you dear old thing?" But Pegler wrenched away her hand, rather ungraciously. "After two such nights as I've had," she muttered, "it's no wonder I'm a bit upset.