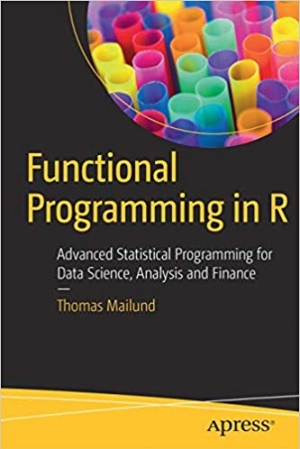 Master functions and discover how to write functional programs in R. In this concise book, you'll make your functions pure by avoiding side-effects; you’ll write functions that manipulate other functions, and you’ll construct complex functions using simpler functions as building blocks.
Download book (pdf - 990.38 KB)
This link for educational purpose only. Please remove file from your computer after familiarization.

In Functional Programming in R, you’ll see how we can replace loops, which can have side-effects, with recursive functions that can more easily avoid them. In addition, the book covers why you shouldn't use recursion when loops are more efficient and how you can get the best of both worlds.

Who This Book Is For

Those with at least some experience with programming in R.

Ada 95: The Craft of Object-Oriented Programming

Programming for Computations - Python: A Gentle Introduction to Numerical Simulations with Python 3.6

Elements of Programming Interviews in Java. The Insiders’ Guide

Beginning Programming With Python For Dummies, 2Ed Sented by Emma