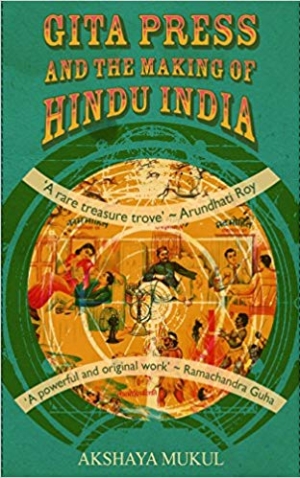 Download book (pdf - 10.49 MB)
This link for educational purpose only. Please remove file from your computer after familiarization.

In the early 1920s, Jaydayal Goyandka and Hanuman Prasad Poddar, two Marwari businessmen-turned-spiritualists, set up the Gita Press and Kalyan magazine. As of early 2014, Gita Press had sold close to 72 million copies of the Gita, 70 million copies of Tulsidas's works and 19 million copies of scriptures like the Puranas and Upanishads. And while most other journals of the period, whether religious, literary or political, survive only in press archives, Kalyan now has a circulation of over 200,000, and its English counterpart, Kalyana-Kalpataru, of over 100,000. Gita Press created an empire that spoke in a militant Hindu nationalist voice and imagined a quantifiable, reward-based piety. Almost every notable leader and prominent voice, including Mahatma Gandhi, was roped in to speak for the cause. Cow slaughter, Hindi as national language and the rejection of Hindustani, the Hindu Code Bill, the creation of Pakistan, India's secular Constitution: Kalyan and Kalyana-Kalpataru were the spokespersons of the Hindu position on these and other matters. The ideas articulated by Gita Press and its publications played a critical role in the formation of a Hindu political consciousness, indeed a Hindu public sphere. This history provides new insights into the complicated and contested rise to political pre-eminence of the Hindu Right. Gita Press and the Making of Hindu India is an original, eminently readable and deeply researched account of one of the most influential publishing enterprises in the history of modern India. Featuring an extraordinary cast of characters - buccaneering entrepreneurs and hustling editors, nationalist ideologues and religious fanatics - this is essential (and exciting) reading for our times.